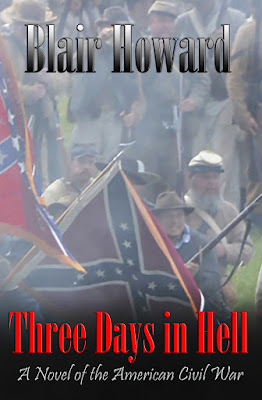 For more than two months, Union General William Rosecrans and his Army of the Cumberland pursued General Braxton Bragg's Confederate Army of Tennessee from Murfreesboro to Chattanooga. Finally, on September 18, 1863, on the banks of a small river in Northwest Georgia, the two great armies came face to face, and so began three days of hell, including the two bloodiest days of our nation's Civil War.

Three Days in Hell is a novel, a work of fiction, based on actual historical events. The characters, with one exception, were all real people. The words they speak throughout the story are the author's, the deeds they did, their success and failures, are their own. Drawing on many years of meticulous research, Blair Howard dramatizes one man's contribution to the stunning Confederate victory at Chickamauga. Brigadier General Bushrod R. Johnson was the key player for the army in gray.

This is the story of Confederate General Johnson's three days at Chickamauga, and his grand and glorious charge of more than a mile that smashed through the enemy lines and resulted in a resounding victory for the Confederate cause and an ignominious defeat for General Rosecrans. Even Johnson's enemies praised what he did that day. Some compared it to Pickett's Charge at Gettysburg, but where Pickett failed, Johnson succeeded.

Three Days in Hell, action-packed from start to finish, is the story of Confederate General Bushrod Johnson's Chickamauga as told through the eyes and words of one of his staff officers, Major Chester Rigby. The author takes you onto the battlefield as no one has done before. He plunges you right into the center of the action, which doesn't let up until the very end. It's a story of heroism, desperate deeds, and death and destruction on a scale the likes of which had never been seen before.

Up front where we were, the road ahead was clear, a nice easy ride. For the infantry, it was a nightmare. I remember looking back along the column and shuddering when I saw the swirling clouds of thick, choking dust over the ranks; the farther back, the thicker the dust. For the first hundred yards there wasn’t much dust. Beyond that, the lead regiment, the 17th Tennessee, had disappeared in the thick haze. How those marching soldiers must have suffered.

Around six-forty-five in the morning, we arrived on the banks of Pea Vine Creek, a little more than a mile and a half east of Reed’s Bridge, and they spotted us. There must have been at least a thousand of them, Federal infantry, cavalry, we couldn’t tell.

They were well hidden under cover of a line of trees, on the far side of an open field some 500 to 600 yards across – the road we were on ran right through the center of it.

We were taken completely by surprise. The first we knew of them was when we were met by a firestorm of Minié balls. Fortunately, the range was extreme. Only two men were hit – both junior lieutenants – and several horses, including mine, although the wound was a minor one. Still it turned my usually docile beast into a wild thing that did its best to fling me out of the saddle.

For several minutes, there was utter chaos at the head of the column as the horses of the more than eighty officers and men reared, wheeled, and bucked as we tried to maintain some semblance of order and turn back. Two of Forrest’s escort went down, along with several more horses, screaming and kicking. The horses made much easier targets for the sharpshooters at extreme range. Fortunately, however, most of the incoming fire went over our heads, probably due to the enemy over compensating for the distance.

Okay, history lovers, this one's for you. The author description of the events at the Battle of Chickamauga are so realistic I felt as if I'd been the battle myself. I could hear the sound of cannon, taste the choking dust, mourn the awful carnage, and feel the emotions of fear and excitement as I followed the story. I was a history major in college, and I've often thought that if we want students to learn about history, we have to find a way to make it real to them. I think a book like this might just do it. It would be hard to not get interested in this story.

By the way, the Battle of Chickamauga was a decisive Confederate victory. Even General Bushrod Johnson's enemies praised him for his handling of the battle.

The book is told from the point of view of one of General Johnson's officers which lends an immediacy to the events. I can highly recommend the book to anyone who has an interest in the Civil War or war in general. 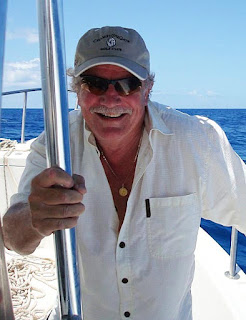 Blair is also a travel writer and professional photographer specializing in golf travel, vacation travel, and golf course photography. His travels take him throughout the United States, Europe and the Caribbean playing golf, writing about his experiences, and photographing the golf courses he visits. You can follow him on About.com here: http://abt.cm/1zoDpei.

Blair is the author of more than 40 books and more than 4,500 magazine, newspaper, and web articles. His work has appeared in many national and international publications, including Delta's Sky Magazine, PHOTOgraphic magazine, The Mail on Sunday, The Walking Magazine, Petersen's Hunting Magazine, The Boston Herald, The Detroit Free-Press, The Anchorage Times and many more.

Blair Howard will be awarding a $25 Amazon/BN GC to a randomly drawn winner via rafflecopter during the tour. Use the link below to enter.

What is your most bizarre talent?

Sounds like a great read, thanks for sharing it and the review, I enjoyed following the tour and learning all about Three Days in Hell, Good luck!

Thanks for sharing your thoughts on this book, I am looking forward to reading it myself!