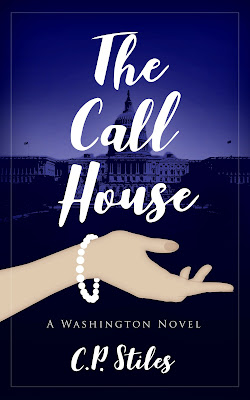 The Call House
by C.P. Stiles

A war on vice In Washington, DC—a city constantly awash in scandals? Hard to believe, but it really happened.  Only not exactly the way it’s told here.

All Mattie Simon knows is that she wants adventure and her hometown doesn’t have any. She wants independence, maybe some romance.
All Andrew Stevens wants is to do his job as a newly-elected congressman.

But Washington has a way of changing people—even when they get what they want.

Fast-paced and funny, The Call House takes you back to a time of relative innocence, when people flocked to the nation’s capital to do good works and instead got caught up in sex, money, and politics. What else would you expect?

IN the mornings, the bathroom was crowded with the sweet smells of lavender soap, gardenia perfume, and lilac dusting powder, with the bright colors of pink-red lipsticks and near-orange rouge, with drying stockings and still damp lingerie. With five women in one apartment, even an apartment as grand as Flo’s on the top floor of the building on Connecticut Avenue, mornings were hectic.

Awake early but unsure what to do, Mattie ended up being last in line for the bathroom. She wasn’t used to waiting.

She’d grown up with only her mother; her father had been wounded in the last war, his lungs badly damaged by gas. She barely remembered the man who died when she was four, but his absence lingered in the white clapboard house. Upstairs, her mother kept always to one side of the bed and lived so quietly, Mattie almost felt as if she’d grown up on her own.

A tall girl, with soft ash-blond curls, walked past Mattie waiting in the hall.

“You’ll have to learn to be pretty fast around here if you want to get in the shower while we’ve still got hot water.”

“That’s all right,” Mattie said. She’d never showered in hot water back home. Her momma hadn’t wanted to trouble anyone to fix the water heater after it broke. She didn’t like troubling anyone for anything, so when something broke, and it couldn’t be fixed by prayer, it stayed broken. Mattie thought her momma’s whole life stayed broken after her daddy died.

“I’ll show you how it’s done,” the tall girl said.

She banged on the bathroom door. “Vera, there’s exactly one of those jelly donuts left. If you want it, you’d better come grab it fast.” She had to step back, the door opened so quickly.

C. P. Stiles is a fiction writer living in Washington, DC. This is her first novel

I've been writing all my life.

When I first heard the story about the best-known, high-priced call house on the East Coast located right in the middle of a nice residential neighborhood - I was intrigued. I'm still not sure why. Even after spending a few years researching and many more years writing. Maybe it's the idea of having something sort of shady going on right down the street and none of the neighbors had the faintest idea. (Warning: No sex or even steamy scenes)

The author will be awarding a $15 Amazon or B/N GC to a randomly drawn winner via rafflecopter during the tour.


a Rafflecopter giveaway
Posted by Elaine Cantrell at 4:10 AM