Beyond the Book: Review The Sheriff's Woman 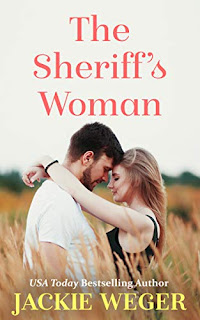 He had his eye on her for years. But she was married. Now she’s not. He’s all in.

Rachel Cameron prefers to lick her wounds and protect her children from gossip and shame in isolation on a small homestead in the Ozark Mountains. But life-long bachelor and ex-Marine Sheriff Garrett Stark has other ideas.

Drawn to Rachel, Garrett wields all the power and charm he can muster to insist she return to town for her safety and that of her children. Exasperation and anger rule on both sides. Rachel balks, but does not anticipate the raft of dizzying emotions stirred by the Garrett’s relentless attention.

The moment Garrett takes her into his arms, Rachel knows she must make a choice: honor the truth and face her fears or live forever as an outsider.

It’s one thing for your husband to leave you for another woman, but Rachel Cameron’s husband left her by committing suicide while in jail. Her friends don’t know what to say to her, and her kids are having a hard time in school. Besides all that her mother-in-law who is a terrible person blames Rachel for the split, totally ignoring the fact that her son was no good right from the beginning. Rachel has no money so she’s forced to sell her house and move to the isolated farmhouse that she grew up in.

Garrett Stark was always attracted to her, so with no husband in the way he now tries to charm Rachel into his life. It’s a hard thing to do because Rachel hates him and blames him for her husband’s death. He’s the sheriff, and her husband died on his watch.

I found Rachel to be a sympathetic character. She had as many problems as the day is long, but she’s coping and doing her best for her family. I liked Garrett’s perseverance too. He knew that Rachel was wrong about him, and even though she was hateful to him, he still continued to help her. The author took her time fleshing out the characters and capturing the feel of small town life. The relationship between Rachel and Garrett wasn’t rushed either. Step by step they were drawn to each other and into a meaningful relationship.

The story had a happy satisfying ending that made you feel good. I liked the book, and I think you might too.