The Art Of Courtly Love 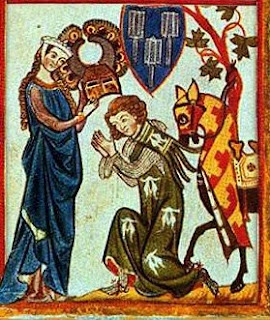 During the Middle Ages, the nobles of Europe practiced the art of courtly love which is an ideal form of spiritual love that eventually mixed with the code of chivalry. It began in France in Aquitaine and soon spread throughout Europe. Courtly love allowed a knight or courtier to completely devote himself to a noblewoman and lay all of his achievements at her feet. Courtly love became fashionable probably because of the way marriages were made during the Middle Ages. The nobility seldom married for love. They married to enrich themselves and their families or maybe for political reasons.

It was okay for married people to play at courtly love provided they remembered the rules. Courtly love was supposed to be a pure, ideal form of love. There wasn’t anything physical about it. It was romance personified. Of course, some people forgot that and got into trouble. Remember Queen Guinevere and Sir Lancelot? They're a good example of courtly love gone amok.

Imagine yourself at a medieval tournament. A knight in shining armor riding a beautiful white charger dashes over to the box where you are sitting and begs a token from you before he goes into the joust. You pull a handkerchief from your pocket or perhaps a scarf and allow the wind to carry it his way. He catches it, and his eyes never leave yours as he kisses the scarf and tucks it into armor. He wins the joust and returns to lay his trophies at your feet while you shower him with rose petals.

Or imagine perhaps that your beloved one spent his time composing lovely ballads in your honor. The entire castle might end up singing of your beauty, wit, grace, and charm.

Heck, yeah, I’d play that game. Check back next week, and I’ll share some of the rules with you.
Posted by Elaine Cantrell at 9:44 PM