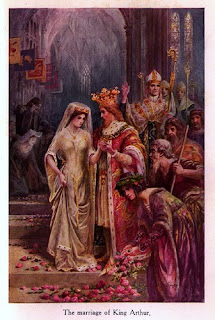 Today when people get married we assume they did it because they’re in love, but things were different back in the Middle Ages. During that time most marriages were arranged by parents and were little more than business arrangements. Sometimes a man would get to pick his bride, but women almost never chose the groom. Of course, if you were a peasant you had a better chance of marrying for love because you didn’t have to worry about things like uniting with a wealthy, noble family and extending your families holdings and power. Even so, some peasant marriages were also arranged.

In the case of the nobility, marriages were arranged when the bride and groom were little more than children. Girls were often married by the time they were twelve and boys seventeen, but the groom was usually older than the bride, and some people were actually in their early twenties before they married. For men, it might be even later. On the whole this may seem a bit early, but they did it because women lived such short lives. They had to get married early so they could produce children. Of course producing children is one reason why women died so young. The groom also received a dowry or gift from the bride’s parents. This money was his to keep forever. Naturally the bigger the dowry, the more appealing the bride.

After a marriage was arranged a notice was placed on the church door. The church wanted to be sure that there was no impediment to the marriage. Actually, there were a lot of reasons for prohibiting a marriage. One was that the bride and groom were too closely related. Rape, adultery, or incest would also stop a marriage. People couldn’t be married by a man who had killed someone, nor could they be married during Lent or Advent.

Once you were married it was probably forever. Divorce is common today, but it wasn’t in the Middle Ages. During that time there were few acceptable reasons for divorce. One acceptable reason was if either the man or woman was not of legal age, 12 for girls and 14 for boys. Also, if the husband or wife had previously made a religious or monastic vow or were not Christian the marriage was dissolved. The last reason for divorce was if the woman, not the man, was incapable of sexual relations.

In the end, we can see that most nobles married virtual strangers. Some of the couples fell in love, but I imagine the best some of them could do was become friends. It might be interesting to note that if a wife irritated a husband, it was perfectly acceptable for him to beat her. Men were forbidden from killing or maiming the women, but that’s about all.

Drop back next week when we’ll talk about the wedding ceremony itself. People enjoyed weddings back then too.
Posted by Elaine Cantrell at 8:30 PM

Thanks, Emma. I love the medieval period. Hope everyone is well at your house.

We're all well...just a little tired.

I have always loved the medieval period. It was brutal, but an intriguing period. The more I learn about it, though, the less romantic it becomes. Still, in fiction, we can romanticize it.

Can't say that I'm unhappy to live in these times. Like my comforts too much and the right to pick my mate - not that we always end up with the best choice, but at least we have the right. Very interesting post.

I love the medieval period too, but a contemporary romance author probably will have to romanticize it. And that's the fun part. Thanks for stopping by, ladies.

Ain't it always the woman who had no say in anything. I do love to read about this period, but there is no way I would want to live there and then.