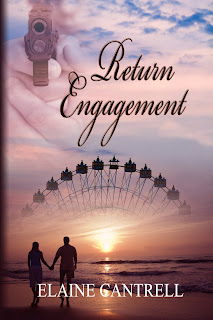 Sweet Saturday Sample is a group of authors who share a sample from their writing with readers every Saturday.  When you leave my blog, you can go here for more participants.  My sample is from Return Engagement which is available at Whiskey Creek Press.

In this excerpt, my hero and heroine met on the beach after a ten year separation and agreed to go to dinner together.

"Look at the moon, Richard. Have you ever seen anything so big and beautiful? Isn’t it lovely the way it’s reflecting off the water?"
"Yes, but not as lovely as you are." Richard made a sound of disgust. "That is so trite. You’d think I could do better, but  all evening I’ve had trouble saying what I mean."


Elizabeth laughed. "Maybe it’s because you’re trying too hard, but for the record, I think you’re doing just fine." She shivered and hunched her shoulders as she hugged herself. "That wind is cold."
Richard immediately removed his jacket and handed it to her. "Here, put this on."
"Won’t you be cold?"
"I’m fine. I’ve got on long sleeves and that’s enough." His eyes twinkled in the moonlight. "In fact, I kind of like the idea of you wearing my clothes. Sounds like high school, huh?"
The chilly wind that blew across the moon-drenched water snatched Elizabeth’s laughter away. "Who cares? Sometimes it’s nice to be as irresponsible as a teenager."
Richard tugged on her hand. "Let’s sit down and watch the moon awhile."
Elizabeth willingly sank into the damp sand and cuddled close beside him. My gosh, the man had muscles she hadn’t known even existed!
"Richard, about this evening…"
"Elizabeth, about Alex…"
"You go first," Elizabeth urged. Her shoulders marginally relaxed. She wasn’t looking forward to telling him she couldn’t see him again.
"All right, I will." Richard turned slightly, an almost angry look on his face. "What the hell do you think you’re doing getting yourself engaged to Alex Crawford? It’s obvious to a blind man that you don’t love him. You’ve been teasing me   and flirting with me all evening. You’ve even kissed me."  He stirred up the butterflies in her stomach when he gently caressed her shoulder. "Right now your body language makes me think if I wanted to take this snuggling any further you’d be willing."


"Wha…" Elizabeth sputtered.
"You don’t strike me as the type of woman who’d pick a man for a night of sex and then go back to her fiancé like nothing had happened. If that’s true I don’t think you love Alex as much as you think you do. The question is: what are you going to do about it?"
Elizabeth moaned and hid her face in her hands. Richard expected this surprise meeting to lead to something more than a hot dog on the beach, a casual meeting between two old…friends. I’ve done enough damage for one evening; I’m going home before I cause any more trouble. I’ve betrayed Alex and given Richard hope for a relationship with me when there is no hope.
She tried to jump up, but Richard grabbed her and held her close. "The wind is cold, and you can think just as well, no better, in my arms."
Elizabeth gave up the effort to get away from him. There was no way she could argue with those hard, muscled arms. "Yeah, right. Being in your arms clarifies everything! I’m so confused I don’t know if I’m coming or going," she cried. "I do love Alex. I do! That’s why I agreed to marry him, but with you I feel like a different person.
"I know I shouldn’t have flirted with you and kissed you,  but I couldn’t help myself." Her eyes misted with tears. "I didn’t want to help myself. It’s like it was ten years ago only better because now nobody can accuse me of corrupting a minor. You asked me what I’m going to do, but to tell you the truth, I don’t know. The only thing I’m sure of is that I don’t think I can stand it if you walk away again."


Elizabeth threw her hands over her burning face again. "What kind of woman am I? I haven’t seen you in ten years, yet here I am leading you on and encouraging you to… What’s wrong with me!"
Richard jerked her hands away from her face and kissed them. "From my point of view things have finally taken a turn for the better." Satisfaction oozed from his voice. "You’re willing to admit you don’t want to lose me. It’s taken ten years, but we’re back where we belong: together. Everything I ever felt for you came back the minute you spoke to me." His voice lowered and became husky and persuasive. "Don’t tell me you didn’t feel it too."
"I…" Elizabeth fell silent. After all, what could she say?
"Let me help you make up your mind about what you want to do." Richard pushed her back into the sand and kissed her, a delicate brushing of lips that deepened as hearts caught fire.
Posted by Elaine Cantrell at 11:31 PM

Great excerpt! Now I want to know just what she decides to do (or can I guess?)

I've read this book, and this excerpt simply reminds me what aterrific read Return Engagement is.

Very sweet sample. Thanks for sharing.

Paula, Sherry, and Jennifer, thank you all for reading the excerpt. I'm glad you liked it.

Okay, I've been hovering on the edge of purchasing this one all summer. I guess I'll have to just dive in.