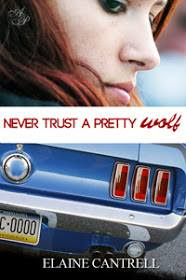 “Two o’clock. Men in khaki.” Andy came to a halt and jerked her against him. “Kiss me like you mean it.”

Liesel didn’t mind if she did. Hopefully the khaki men would never imagine that two lovers out for a stroll had only moments before been running for their very lives. She prayed the men didn’t get too good a look at them. Throwing her arms around him, she pressed her body against his.

She wouldn’t have admitted to it for anything, but in spite of the danger, she felt a thrill from the top of her head to the bottom of her feet. Nobody could kiss like Andy Bryce!

This week: I've picked up where we left off last week.  This is as far as we're going in Never Trust a Pretty Wolf. We'll do something else next week.

Andy took her hand, and they strolled casually across the bridge as if they’d been on a leisurely little walk. He kissed her again before they got into the Mustang. The minute they got in, he put the car in gear and slowly made his way out of the park.

“Now, Liesel,” he said. “Why don’t you tell me why those men are trying to kill you?”

You certainly left us on a cliffhanger with this snippet!

That question sure is a great way to end a romantic mood.

That's finally the right question! And now you're leaving us just hanging . . .

He's a very sensible man and I guess she now has a protector.

And finally we get to the crux of the matter! I want to know as much as Andy! Great place to leave us hanging, Elaine!

How could you leave us at this point? You are cruel. :) He finally asks the question we all want the answer to.

What a way to dampen the mood.

Well at least they're going to talk and no doubt secrets will be revealed. Enjoyed the snippet!

But will she tell him the truth? Great cliffhanger for us!

That is a very good question!