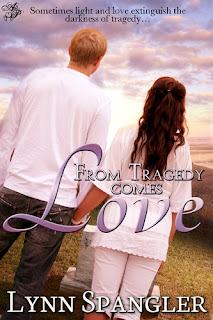 Readers, please help me welcome the fabulous Lynn Spangler to the blog.  Lynn's here to tell us about her new release From Tragedy Comes Love.  It sounds good to me.  I hope everybody will head on over to Astraea Press and pick up a copy.

This story was written in memory of my mother. She influenced parts of the story. I hope after you read the story, that you appreciate the ending. I know my Mom is in Heaven looking down on me now. I love you, Mom!

Sometimes light and love extinguish the darkness of tragedy…

The heartache of loss weighed heavy on Blythe Kenner. Blythe’s mother had been her best friend, her confidant, her mentor. Now, she is alone. Or is she?

In steps ex-boyfriend Garrett Richmond. Blythe dumped him with little explanation. His feelings for her were so complete that they made her feel unworthy. She was unsure if she’d ever be able to love someone so intently.

From the tragedy of death, Garrett feels the need to help, comfort, and shelter the woman who still held his heart captive. He knows she needs space after the loss of her mother but he won’t stay away for long.

Will Garrett’s daily check-ins rekindle feelings for him she thought had long since passed or will his strength and kindness ignite the spark threatening to light the fire again?

With a wistful sigh, she opened the door and froze in place.


Garrett Richmond stood in all his handsome glory.


“What are you doing here?” she asked, her voice barely a whisper.


He seemed to study her, his gaze resting on her face. Oh, how she wished she’d never answered the door. She looked like a train wreck and felt the same. Garrett, on the other hand, looked impeccable in his three-piece suit.


“Your mother, whom I liked immensely, just passed away. I couldn’t ignore that or you. I had to see how you were.”


“I’m…,” she stammered. A lump formed in her throat and she swallowed hard. “I’m okay. Just dealing with funeral arrangements.”


“Are you sure? No offense, but you look beat.”


She leaned her head against the door. “I am tired. It’s hard to take care of all the arrangements and what-not by yourself.”


Though his stance was casual, hands in pockets, jingling change, his face was serious. Garrett’s eyes were blue pools of emotions. His words echoed in her mind and she found herself confused by their meaning.


“Alone.” That one word held so much promise and she almost believed it.

I live in South Central Pennsylvania with my wonderful, loving husband and my beautiful daughter. I also have a son who is currently serving in the U.S. Navy. I have a cat named Kolzig and a dog named Cede who allow us to live with them.

I love to write and read. I also make jewelry when the mood strikes. I'm a huge sports fan. I love football, NASCAR, and hockey. I'm also a bit of a game show freak. I love old game shows from the 70's and 80's like Match Game and $25,000 Pyramid. Television shows like Criminal Minds and Rizzoli and Isles are also favorites of mine.
Posted by Elaine Cantrell at 12:00 AM

Thanks for having me today, Elaine!

You're welcome. come back anytime.