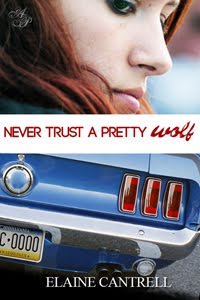 And you thought you'd had a hard time. My excerpt today comes from Never Trust a Pretty Wolf which is available at http://www.amazon.com/Never-Trust-Pretty-Elaine-Cantrell/dp/1480153818/ref=sr_1_1?ie=UTF8&qid=1379727377&sr=8-1&keywords=never+trust+a+pretty+wolf+by+elaine+cantrell  In this excerpt, my hero, a marshal, finds out why my heroine dislikes him so much.

Blurb:
Liesel Wolf has a secret, a dangerous secret she’ll go to any lengths to conceal. When she’s paired in a charity game with sexy marshal Andy Bryce, a man with secrets of his own, her carefully constructed world comes crashing down, and Liesel’s on a collision course with her past.

“It occurred to me,” Andy replied, his frosty voice in tremendous contrast to the hot, writhing emotion that filled the Mustang. “I guess you don’t want to go to jail. The Wolf family would throw a fit if your name was mentioned on the news in connection with a killing. Did you know those guys? Do they work for your father-in-law?”
He saw her hands clench as she balled her fists. “Don’t talk to me like that!” she snapped. “You know nothing about me, so don’t presume to judge me. I divorced William six months ago.”
“And I bet you got a nice settlement.”
Liesel shook her head as her eyes flashed. “Shut up. I don’t owe you any kind of explanation. If you want to go to the police, you go right ahead.”
“What will you do? Call your husband?”
“He isn’t my husband.”
“I understand now why you disliked me from the moment you met me. I guess over the course of your marriage your family’s been on the wrong side of the law often enough to make you leery
of any law enforcement official.”

Liesel’s demeanor changed. Fear melted away like an ice cube in July. She stared holes through him. “You’re right. I don’t like policemen. Last year at this time I was pregnant. I decided to go downtown to shop at a new baby store, but I never bought a thing. The minute I stepped out of the car a detective grabbed me and shoved me against the car. “When I couldn’t tell him anything about William, he forced me to the ground and kicked me in the stomach. He left me lying in the street, hemorrhaging. I had a miscarriage ten hours later.

"I pressed charges against him, but he told the judge that he pushed me to the ground because he thought I was reaching for a weapon. He denied kicking me, so the judge let him go. I guess he thought the world didn’t need another Wolf in it.”
Posted by Elaine Cantrell at 12:00 AM