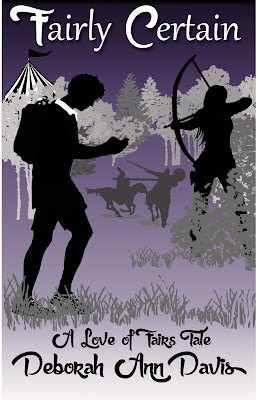 Fairly Certain is the unlikely adventure of nineteen year old Petir Capota, a computer geek who finds himself back in the days of Robin Hood after falling out of a tree in Connecticut. He awakens surrounded by a band of young British scavengers, clothed as if in Old England. His instinct to freak out is tempered by the arrival of a fair maiden wearing a bow…and arrow. Normally, fair maiden types don’t go for computer geek types, but for some reason, Petir is fairly certain he can do whatever he wants in this realm.

With the conflict of the Royals escalating, Maid Rianne has joined the outlaws hiding in the forest, outwardly defying the handsome and accomplished knight to whom she is promised. She is fairly certain she merely feels flattered by Lord Petir’s uncensored admiration of her skills with the staff and bow, the same unmaidenly pursuits disdained by her own knight. However, that does not explain the quickening of her pulse produced by Lord Petir’s unguarded gaze.

The outlaws bring Petir to their camp to tend his injuries. To Petir’s delight, and to Maid Rianne’s dismay, they invite him to join their merry band. It’s all fun and games until she is captured by the enemy. Now, a geek with no ability to defend himself must find a way to rescue the fair maiden.

“Enjoy the benefits of our station, here at the tournament, my dear,” Lord Robert murmured against her hair. “I shall buy you a beautiful new dress, and—”

Mirth bubbled up in Rianne. “Lord Robert, I cannot compete in a dress.”

He released her and stepped back so quickly she staggered with his absence. Alarm flashed through her at his reddened face. She had never seen such a thunderous expression.

“You will not compete,” he declared. “Archery is a sport for warriors, not wenches.”

“Wenches?” Rianne’s spine stiffened along with her resolve.

“Aye, wenches. Why? Does the word displease you? What word would you choose?” He regarded her with disdain. “Tell me, Maid Rianne, do you appear more a lady or a wench?”

Unbidden, her palm swung up to strike him, but he intercepted her hand. With a harsh laugh, he shoved it away. Without a thought, she took a step back, stripping her bow from her shoulder as she moved. Grasping the bow’s end with both hands, she swept it in a wide arc, catching him behind his legs and upending him. He landed on the ground with an audible thump.

He stared at her from the flat of his back, mouth agape.

For a moment, she stared back, her own jaw slack with disbelief at her uncharacteristic behavior. An odd exhilaration filled her.

“The word I would choose is warrior, m’lord.” She pointed the bow towards his nose. “I am done with you. You shall see what a warrior can do at the competition.”

She ran off, escaping into the crowd before he could stop her, but his parting words fell like a shroud on her shoulders, dimming her elation.

“You are no warrior. You are but a maid in boy’s clothing. And nothing more.” 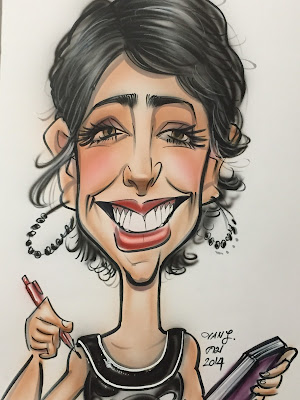 DEBORAH ANN DAVIS writes Quirky New/Young Adult Fiction with a Twist. She began writing when searching for inspiration for her 5th grade English Journal. Lo and behold, she found her world was full of funny tales just waiting to be told. As she grew older, it never occurred to her to pursue writing, not even when she discovered her flare for telling stories at college parties.

After a string of undergrad majors, she realized she could reach a captive audience EVERY DAY in the public school system. As you probably know, teenagers love to laugh, and what could be more entertaining than Biology, Earth Science, and Environmental Science? Then there's an added bonus: Once teens know you like to laugh, they want to make you laugh. Go figure.

After a particularly nasty bout of Lyme disease, she turned to Fitness to boost her health, and to Writing to boost her happiness. Currently, she is a healthy and happy Educational Speaker and a Certified Personal Trainer.

Twelve years after their first kiss, Deborah reunited with, and married her childhood sweetheart. Together they coached their daughter's AAU Basketball Team, which swept States two years in a row. (Yay!) Then, for several years, their daughter and their money went to college.

They presently reside on a lovely lake in Connecticut. When she isn't writing novels for her Love of Fairs series, she enjoys dabbling with living a sustainable life, dancing, playing outside, and laughing really hard every day. She also promotes increasing your movement throughout your day as Wiggle Writer in her Merry Meddling blog at http://deborahanndavis.com/merry-meddling/ .

Fairly Certain is available through:

Deborah will be awarding a $20 Amazon or B/N GC to a randomly drawn winner via rafflecopter. Use the link below to enter.

I just wanted to say to anyone who stops by, today has the potential to be remarkable for you. Take advantage of it. Thank you for hosting Fairly Certain.

Bonus Random Joke while I wait for someone to talk to:
A photon walks into a hotel. The desk clerk says, "Welcome to our hotel. Can we help you with your luggage?" The photon says, "No thanks, I'm traveling light."

I am loving your random Jokes! Thank you for the post and the giveaway!

What can I say? I have a refined and well-polished 10th grade sense of humor.