Devil's Promenade: A World of Gothic: The US 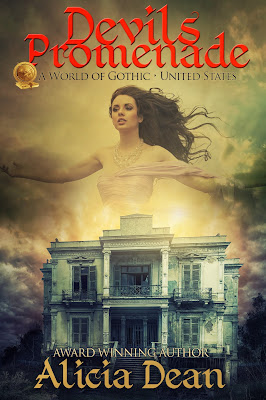 Welcome to my blog. Today I have the pleasure of interviewing award winning author Alicia Dean. Alicia, thanks so much for talking to me and the readers.

Thanks, Elaine. It's nice to be here.


1.Tell us a little bit about yourself. Be sure to include your links so we can find you on the web.

I live in Edmond, Oklahoma. I have a full-time job as legal assistant in a divorce law firm. I am an editor for The Wild Rose Press and much busier than I should be, but I love what I do, all of it, so I don’t see any plans to slow down in the near future. I’m divorced with three grown children, although one temporarily resides with me.

You can find me here:

·      Website: https://aliciadean.com/
·      Facebook:  https://www.facebook.com/Alicia-Dean-559598754221926/?fref=ts (I play fun games on Facebook and give away a $25 gift card each month, and a random $10 gift card just for commenting)
·      Sign up for the Novel Notes Authors newsletter by me and four of my author friends. Great articles, book deals, and we give away an Amazon gift card each month: https://www.facebook.com/NovelNotesAuthors/?fref=ts
·      Twitter: https://twitter.com/Alicia_Dean_

2.I didn't know that you were an editor for The Wild Rose Press. I have a book with them myself. How did your writing career begin?

I’ve wanted to write since I was a child. I set it aside when I married and was raising my children. In 2001, I took a class with author Mel Odom that renewed my desire to publish. In 2007, Wild Rose Press published my first novel, Nothing to Fear.

3.I think it's wonderful that your dream came true. Besides yourself, who is your favorite author in the genre you write?

Ha, well, I write in many genres, but my favorite genre is suspense, so I would say Michael Connelly and Dennis Lehane are my favorites in that genre.

4.What's the best part of being an author?

The joy of creating worlds, characters, and stories that didn’t exist until you made them exist.

5.LOL. That's exactly the way I feel about it. Would you share an excerpt from one of your books with us?

Here is the blurb and opening for my upcoming gothic mystery romance, Devil’s Promenade ~ A World of Gothic: United States. It’s part of a series I’m doing with other authors, and each novella is only 99 cents. Mine releases June 30, but is available for pre-order here: https://amzn.com/B01GNGTU96

Amidst a blizzard, paranormal debunker Camille Burditt arrives at Devil’s Promenade in Oklahoma to research a supernatural 'spook light' phenomenon for her latest book. There she encounters a ghostly being, which she dismisses as a figment of her imagination. But as the apparition becomes too persistent to deny, Camille realizes the woman’s ghost is quite real—and that her demise was not accidental.

Declan Rush—the inhospitable, reclusive owner of the inn where Camille is staying—is linked to the deceased woman, but he is less than forthcoming. Despite his unfriendliness, Camille is oddly drawn to him, even though she suspects his connection to the spirit might be that of killer to victim.

When another suspicious death occurs, Camille intensifies her investigation. She has precious little time to ferret out the truth. Not only is her book deadline looming—she's desperate to discover if the man she’s falling for is a murderer.

*** A World of Gothic is a Gothic Mystery Romance Series by authors from all over the world. For information on other titles and for interesting tidbits on mysteries and the authors, check out A World of Gothic Facebook page:

Alicia, thanks so much for visiting my blog. Your excerpt set a truly gothic feel! 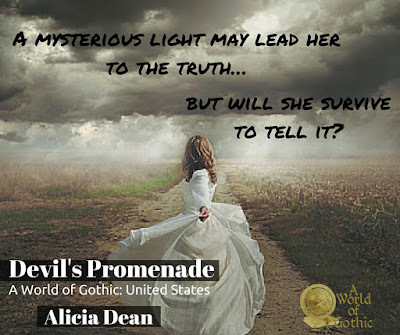 Pre-ordered mine, too! I love how you get our hearts beating overtime right from the start!Is there really such a thing as the spook lights? Best wishes for DEVIL'S PROMENADE!

Thank you so much, Diane! I also love those old gothics. It's so much fun to write them too. I hope you enjoy!

Aww, thank you too, M.J. YES, as a matter of fact, there is. And, they are about 15 miles from where my sister lives, which is 200 miles from me. My writer friends and I took a road trip in March to check it out. We sort of might have seen the spook light. Oh, and the area is actually called 'Devil's Promenade.' Cool, huh? :)

I like Diane read Holt and Whitney, mostly because the books were ones my mother left on the table next to her favorite chair. Although the Gothic heroines of the 1970s were not as interesting as the ones featured today. Love the professional title "paranormal debunker" which tells me about the heroine's personality. How great you did firsthand research on the "lights." Research road trips are fun. Best of luck with the new release.

What a great excerpt! You know I don't like scary reading all that much, but your hook has me...hooked. Best wishes on your upcoming release! BTW - we have "spook lights" here in the mountains, too. Let me know when you're up for a long road trip east!

Great interview and terrific excerpt! Best of luck with your book.

Love Gothic, love the excerpt. You're in good company with this one. Thanks so much for sharing, Alicia, and thank you, Elaine, for hosting.

Thank you, Pam...I appreciate you stopping by and the kind words!

Hi Linda...thank you! No, they were not as interesting, but there was still something compelling about those stories and the mood/atmosphere. Yes, I like 'paranormal debunker' which was a suggestion from one of the other authors in the Gothic series. It was lots of fun!

Ha, Ashantay. This is 'scary light,' I promise. Just a little spooky but not all that scary. Thanks so much!

Thank you, Marissa! I am so glad you stopped by!

Thank you, Elizabeth. I'm so glad there are still so many gothic lovers out there. I appreciate the kind words and wishes!