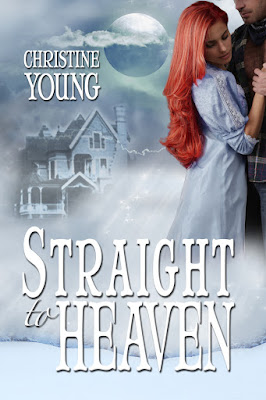 Straight to Heaven
by Christine Young

Running from demons, Alexandra McMurdie stumbles into Forbidden Ground where up is down and elements of nature are contested. Though a strong independent woman in the twenty-first century' she is unprepared for life in the 1800s. Her first sight of the formidable James Lawrence makes her heart skip a beat, giving her cause to reconsider her desperate need to find a way home.

Born with a silver spoon, James’ life was torn apart during the War Between the States. Moving west he vows to put the life he once knew in the past. When he discovers a half-frozen woman near Gold Hill, his heart begins to thaw. His love for Alexandra and his need to keep her from a man who has pursued her through time might cost him his life as well as hers.

Midnight...the witching hour, a time to ease one's conscience and look to the next world for answers. Wild tales of a vortex told by the Native Americans where up was down and large was small, intrigued the valley settlers. One had only to expect the unexpected and it would occur. A ball could roll up hill but not down. No one ventured through the vortex unchanged, simply because the site defied the human mind. Here there were no limits set and no boundaries defined.

Mysterious tales ran rampant among the Native Americans. Fantastical stories portrayed visitors from other ages, other worlds, and even other dimensions passing through time and stopping here for a moment of rest before continuing their journey. Difficult to comprehend, impossible to believe unless one met his fate head on at the appropriate hour. Midnight. When spirits roamed the earth, anything could occur and anyone could vanish.

Midnight...an hour to be wary of, to remain at home and hope it passed by without illusions floating on the stairway, of distinctive flickering in the candlelight, or a hesitant knock on the door from some invisible apparition. No one would wander out at this hour or challenge another, unless faced with no other choice.

Captain James Lawrence had sworn to uphold the law. Tonight, he might have to venture into the unknown; meet any challenge. He might stumble upon an innocent unsuspecting traveler, perhaps encounter a miracle and find a path straight to heaven.

The deserted countryside lay as a freshly painted picture bathed in the moonlight, and the crystal ice that coated the laurel trees shimmered, sending prisms of light toward the heavens. Even February's freezing rains paused as if paying homage to the hour.

James watched the moisture hover in a mindless drizzle of mist; low lying clouds floated and swirled in gossamer veils near the earth, entwining themselves in the manzanita and laurel, around the blackberry bushes, and the fields of grasses and weeds that dotted the hillside.

"Not tonight. Not again..." He pounded his fist against the railing, hoping he heard wrong.

From the west, James Lawrence could hear the low baying of hounds and the steady beat of horses as he stood on the porch of his home surveying his land. Charles Majors would bring his hounds, six of them, merciless in their intent, and trained to hunt man. They did not give up and he'd never known them to fail.

"Son of a bitch!" he said fiercely, "not tonight!" His fist landed squarely on the wooden beam holding up the roof. He stared into the night, cursing the situation. Duty and honor in the forefront of his mind, he knew he would join the posse.

Soon the men would stand at his porch expecting him to mount and ride with them. They were law-abiding men from town. A couple of them owned stores, some panned for gold. One was the saloon owner and another owned the town newspaper. He owed the community, knew he couldn't avoid this responsibility. If they would only come without the dogs, the nightmares might stop.

He rubbed his temples and wished the hammering within would vanish, but the pounding hooves grew louder, the hammering worse. His muscles flexed and as a brittle tension radiated through him, he held his breath, purposely waiting.

Staring into the cold night, he reflected on another time. A time during the war when the dogs had hunted him and they had come so perilously close to his heels. Now, on this moonlit night, even his home offered him no protection, no safe retreat. They came to him for his help—for his expertise. James shivered, yet the sensation wasn't caused by the cold.

He had hoped they wouldn't call on him again, but now it seemed as if the trail lay fresh and in his direction. He hated the look in a man's eye when cornered with nowhere to go; loathed the utter despair that accompanied it.

"Poor wretched soul," he said. "He'll know what hell feels like before the morning sun rises."

My Review:
Straight to Heaven is an historical time travel romance. I'm fond of time travel romances so I was glad to review the book. It's fun to see how people from different times cope with a new reality where customs and traditions are different from their own. I did find one thing that surprised me. In this book, time travel was something to be feared, something associated with demons and darkness. In most books I've read that wasn't the case. I do think it gave a sense of fear to the story because of that evil.

I also liked the hero. He was what I'd call an alpha male, yet he wasn't over the top dreadful. He had heart and emotion, and even though he didn't want to, he finally decided that the heroine must make the choice about how their story ended.

The heroine had a lot to consider before deciding on her future, but I think she made the right decision.

One thing I thought needed to be developed a little more. There was another woman who wanted the hero. I expected her to be around a little more than she was. There was a greater threat in the story, and she became a part of that, but I still thought she'd show up on every page. This did not detract from the story. This is just an observation on my part.

If you love time travel, I think you'd like this book. I can recommend that you grab a copy and check it out.

Born in Medford, Oregon, novelist Christine Young has lived in Oregon all of her life. After graduating from Oregon State University with a BS in science, she spent another year at Southern Oregon State University working on her teaching certificate, and a few years later received her Master's degree in secondary education and counseling. Now the long, hot days of summer provide the perfect setting for creating romance. She sold her first book, Dakota's Bride, the summer of 1998 and her second book, My Angel to Kensington. Her teaching and writing careers have intertwined with raising three children.  Christine's newest venture is the creation of Rogue Phoenix Press. Christine is the founder, editor and co-owner with her husband. They live in Salem, Oregon.

Christine Young will be awarding one winner for Highland Surprise, one winner for Storm's Passion, and one winner for their name in the next book to a randomly drawn winner via rafflecopter during the tour. Use the link below to enter.

Thank you for the lovely review and hosting Straight to Heaven.

Great review! Thanks for sharing :)

What kind of research did you do for this book?

Oh my gosh, the research was extensive. I did grow up in the area where the book was set so a lot of things I knew. My grandfather was a gold miner in the area and my father used to play in the house that is featured on the cover. I've been to the Oregon Vortex in Gold Hill, Oregon. That location inspired the time travel. The vortex is an eerie, hair standing on the neck place. The Native Americans called it "The Forbidden Ground."

What, in your mind, distinguishes this book from other books out there in the same genre?