Land of My Dreams 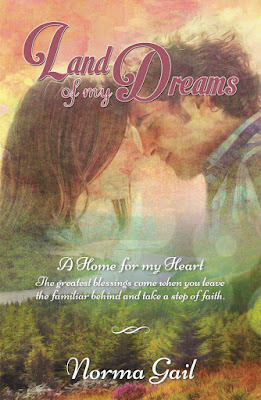 Land of My Dreams
by Norma Gail


Alone and betrayed, American professor, Bonny Bryant longs for a haven of peace. She accepts a position at a small Christian college in Fort William, Scotland, craving escape from her painful past. The passionate love which develops when she meets fellow professor and sheep farmer, Kieran MacDonell, is something she never anticipated.

Kieran harbors a deep anger toward God in the face of his own devastating grief. When Bonny’s former fiancé reenters her life, Kieran’s loneliness draws him to a former student.

How will Bonny decide between her rivals? Can they set aside the past to make way for a future, or will it drive them apart?

Land of My Dreams, Christian Romance Novel, spans the distance between New Mexico’s high desert mountains and the misty Scottish Highlands with a timeless story of overwhelming grief, undying love, and compelling faith.

When Kieran left his office, he saw Bonny standing behind her car, her foot tapping and shoulders sagging. “Can I help you, Dr. Bryant?”

She startled, and he realized he had been so intent on watching her that he had failed to give warning of his approach. The eyes that met his sparkled, their brilliance drawing him like a treasure hunter to a prize emerald. She was a lovely woman.

He checked the urge to brush a smudge of dirt from her cheek. “It’s Kieran, and I’m glad to be of help.” He forced himself to ignore the nervous pounding in his chest and the urge to run. He was alone with the woman who had filled his mind day and night from the moment she had walked into the room.

“I’ll take that spanner off your hands.”

“Spanner? Oh, you mean the lug wrench, of course.” She held it out to him and smiled.

He took a deep breath. Her smile reminded him of sun breaking through a Scottish mist. His fingers brushed hers as he took it, and he realized how small her hands were, like his mother’s finest china. Dainty and delicate.

Something about the patient way she watched caused his uncertainty to subside. Rescuing a damsel in distress wasn’t a bad way to meet. Tossing the caber was no longer possible, but he knew how to change a tire. She stood near enough for him to smell her perfume—feminine, like a rose garden.

1. When did you first realize you wanted to become a writer?
I was about 10 or 12 years old the first time I read Little Women. I wanted to be Jo, sitting up late in the attic, surrounded by cool stuff, writing stories and poetry that might make me famous someday. Jo wrote poems about her three sisters, so I wrote poems about my three sisters. She wrote stories, so I wrote stories. They’re still around somewhere in my attic, but I don’t write in the attic.

2. Besides yourself, who is your favorite author in the genre that you write?
Susan May Warren and Dani Pettrey are my favorites, though they have more of a suspense element that Land of My Dreams does.

3. What are reading right now?
I am currently reading The Tenth Plague, a Christian suspense by Adam Blumer because I am interviewing him on my blog June 6th.

4. Which one of your characters is most like you?
Bonnie Bryant, the female protagonist in Land of My Dreams is most like me. She loves history and books. Scotland calls her name and she feels like she belongs there. The mountains and outdoors are her favorite place to be. When she loves, it is with her whole heart and a betrayal of that love is something she doesn’t get over easily. She is determined and holds tight to the people who mean the most to her.

5. Which of your books is your favorite? Why?
Land of My Dreams is my debut novel, so from that standpoint it is my favorite. It’s my dream of becoming a published novelist come true. I am working on a sequel and have plans for a historical trilogy. I love the setting for LoMD, Scotland and New Mexico. The second being home, and the first being my dream vacation. We did visit Scotland for our 30th anniversary, so it has a very special place in my heart. I love the green mountains, the spectacular lochs, the culture, the food, the traditions, the music, even the rain and fog. I find contemporary Scotland every bit as intriguing as historical Scotland. I hope you will also!
~~~~~~~~~~~~~

Norma Gail is the author of the contemporary Christian romance, Land of My Dreams. A women’s Bible study leader for over 21 years, her devotionals and poetry have appeared at ChristianDevotions.us, the Stitches Thru Time blog, and in “The Secret Place.” She is a member of American Christian Fiction Writers, Romance Writers of America, and the New Mexico Christian Novelists. Norma is a former RN who lives in the mountains of New Mexico with her husband of 40 years. They have two adult children.
Connect with Norma:
Website: www.normagail.org
Amazon Author page: http://www.amazon.com/Norma-Gail/e/B00ILHXBAK/
Book trailer: https://www.youtube.com/watch?v=KQbZIoC_JSE
Facebook: https://www.facebook.com/AuthorNormaGail
Google+: https://plus.google.com/u/0/+NormaGailwrites
Pinterest: http://pinterest.com/normagailth/boards/
Goodreads: https://www.goodreads.com/author/show/7874459
Twitter:  https://twitter.com/Norma_Gail
LinkedIn: http://www.linkedin.com/pub/norma-gail-thurston-holtman/42/71a/3b2

Land of My Dreams will be either $0.99 during the tour.

Norma Gail will be awarding a $25 Amazon or Barnes and Noble GC to a randomly drawn winner via rafflecopter during the tour. Use the link below to enter.

Happy Monday! Weekend sure went by quick. Thank you for the giveaway

Very nice story line and love the cover :) Thank you for the chance to win.

Do you ever suffer from writer’s block and, if so, how do you overcome it?

Thank you for hosting me, Elaine! I appreciate the opportunity!

You are very welcome, James Robert and Lisa Brown!

Peggy Hyndman, I do sometimes have writer's block, like every writer I know. Most of the time I just write through it, getting ideas on paper and go back the next day and see if any of it is any good. I often listen to the playlist of songs I have chosen for the piece I am writing and gain ideas from that. A movie of the same genre, talking it over with my husband or a couple of friends sometimes helps. On recent work, I hit a wall I couldn't overcome and sent it to an editor for her take on the problem. We ended up choosing an entirely different genre to continue writing the piece.

Great post, I enjoyed reading both the excerpt and interview! Thanks for sharing :)

You're welcome, Victoria! I hope Land of My Dreams will make it onto your To-Be-Read list!

Great excerpt and interview. Good luck on your tour!

Thank you for the excerpt and interview! I am really enjoying this book tour! :)

Thank you to all for your kind and encouraging comments! Land of My Dreams is now an Amazon 2016 Book Club Selection!

I really enjoyed reading the excerpt, thank you!

You're very welcome, Nikolina. I hope you will read the book!

I am back and thanking you once again for the great giveaway. I appreciate it!

Good Afternoon! Have a terrific day and thank you for the chance to win

Have a great Tuesday!

I have added this book to my TBR list and look forward to reading this book!

Thanks, Ally! I hope you'll consider writing a review if you enjoy it. Reviews keep authors going and only take a few minutes!

Dropping by to wish everyone a happy Friday!

I enjoyed reading the excerpt. This book sounds like such an interesting and intriguing read. Looking forward to checking out this book.

Hope you are having a fabulous weekend! Looking forward to reading this book!

You have a great weekend also!

I can't think of one. I always prefer the book.