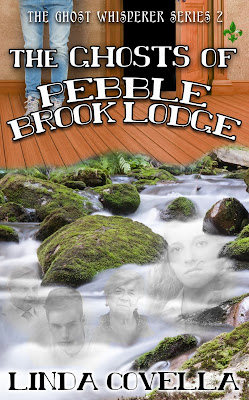 The Ghosts of Pebble Brook Lodge
by Linda Covella

In the rainy forest of the Santa Cruz Mountains, in the small town of Brookdale, in the long-uninhabited Pebble Brook Lodge...exist four ghosts who stand in the way of Pepper’s search for the truth.
In this sequel to the award-winning book The Castle Blues Quake, Pepper Connelly’s chef parents have taken Pepper and her little sister Sage on another restaurant venture to renovate the Pebble Brook Lodge.

One of the unique features of the lodge is a creek running through the large dining room. Pepper learns that, in 1966, a thirteen-year-old girl, Karen, drowned in the creek. Her ten-year-old brother, Willie Hullett, was accused of causing her death. , and his mother and townspeople still believe he was responsible. Willie, now middle-aged, lives with his mother in a cabin in the woods. Mrs. Hullett has never forgiven Willie for her beloved daughter’s death.

As Pepper secretly becomes acquainted with Willie and sees his gentle nature and his beautiful life-like carvings, she’s convinced he was not responsible for his sister’s death.

With the help of her friend Ally Cressman, Pepper sets out to prove Willie’s innocence. With Ouija board sessions, hauntings by four different ghosts, and time travel to 1939 and 1966, Pepper discovers there’s more to Karen’s death than she—or anyone in Brookdale—would have ever guessed.

Inside, a chair scraped against the floor. Steps shuffled toward the door, and then the door creaked opened. The head of an old lady poked out.

“Karen?” The lady swung the door open, grabbed my arm, and pulled me inside. “Where have you been? I’ve been worried sick!”

“Um, my name’s Pepper.” I tried to pull away, but her bony fingers stayed clamped to my arm. “I’m sort of lost.”

“Oh.” Her face had smoothed out with happiness when she thought I was Karen, and now it shriveled, deep with wrinkles like a shelled walnut. She released my arm and clutched her sweater around her neck. She looked as if she were made of strings: the cords in her neck, the ropey veins in her hands, her gray hair that hung like pieces of twine around her bony face. “Look at you, you’re wet and cold. Come stand by the fire.”

I hesitated. There was no welcome in her voice or on her face. Something about her didn’t feel right. Her eyes, still full of worry, darted over my shoulder, looking for Karen, I supposed. But I was wet and cold. A few minutes wouldn’t hurt, and maybe she could tell me how to get back to the lodge.

I truly enjoyed this book even though it's a YA book. The way it's written I think many adults would like it as well. The plot is great and the ending satisfying. The young heroine is sweet, mature, and smart. The author set the stage beautifully. If ever you were going to see a ghost, this would be the place to do it.

This review is short, but you can read the blurb up above. It's a wonderful story that I'd give 5+ stars.

Linda Covella’s varied background and education (an AA degree in art, an AS degree in mechanical drafting & design, and a BS degree in Manufacturing Management) have led her down many paths and enriched her life experiences. But one thing she never strayed from is her love of writing.

Her first official publication was a restaurant review column for a local newspaper. But when she published articles for various children’s magazines, she realized she’d found her niche: writing for children. She hopes to bring to children the feelings books gave her when she was a child: the worlds they opened, the things they taught, the feelings they expressed.

She is a member of the Society for Children’s Book Writers and Illustrators (SCBWI). She lives in Santa Cruz with her husband, Charlie, and dog, Ginger.

No matter what new paths Linda may travel down, she sees her writing as a lifelong joy and commitment.

Learn more about Linda and her writing at http://lindacovella.com/

Linda Covella will be awarding a $25 Amazon or Barnes and Noble GC to a randomly drawn winner via rafflecopter during the tour. Use the link below to enter.

Thank you for your honest review! I look forward to checking this out! :)

Congrats on the tour and I enjoyed the excerpt :)

Thanks for sharing your review! I love YA so I can't wait to check this one out myself :)

When did you decide to become a writer?

Elaine, thanks so much for hosting the tour. I appreciate your time reading and for your wonderful review!

Thanks to you all for stopping by! And Becky, thank you for your question! I've always loved to write; I remember winning a prize in 2nd grade for a story I wrote. :-) I took creative writing classes in college, but that was just for my enjoyment. I didn't decide to pursue writing as a profession until later in life after doing some freelance work on the side. And after publishing some articles in children's magazines, I decided I wanted to write for kids and teens.

Wow, cannot believe it is Thursday already. Flying by for me. Have a great day and thanks again for the chance to win

Thank you for your honest review, much appreciated!

Happy Friday! Thank you for the giveaway and chance at winning

Thank you, Nikolina! Happy Friday to you, James. I hope you all have a wonderful weekend!

Wishing everyone an awesome Saturday. Enjoy your weekend and thanks for the giveaway!

Good Sunday Morning! Thanks once again for the opportunity to win and enjoy your day!

Good Monday Morning, have a great day and thanks for the opportunity you have given us to win