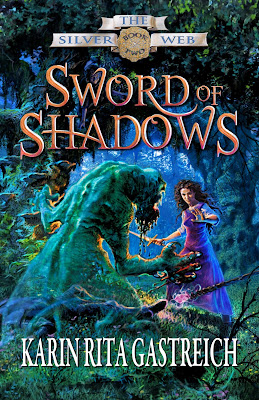 Sisters in magic, Eolyn and Adiana seek to revive a millennial tradition once forbidden to women. When war strikes, their fledgling community of magas is destroyed; its members killed, captured or scattered.

Determined to defend her people, Eolyn seeks to escape the occupied province and deliver to King Akmael a weapon that might secure their victory. Trapped by the invading army, Adiana is taken prisoner and placed at the mercy of the ruthless Prince Mechnes.

Even as their world is torn asunder, Eolyn and Adiana cling to a common dream. Courage and perseverance guide them toward a future where the Daughters of Aithne will flourish in a world set free from the violence of men.

This is the second book in THE SILVER WEB trilogy. It can be read as a stand-alone novel, or as the sequel to the first book, EOLYN.

A hush of wings on the windowsill interrupted Eolyn’s thoughts. She looked up to see a Great River Owl, its proud silhouette outlined by moonlight.

Eolyn rose to her feet in surprise, keenly aware of its penetrating gaze, though she could not see its round eyes in the dark. A breeze ruffled its feathers. Its aura was impossibly familiar: intense shades of gold, burgundy, and forest green, shot through with streaks of deepest indigo.

She held her breath and let it go in a whisper. “Akmael?”

More than a question, it was a hope, a fear, an invocation.

A shimmer passed through the owl, followed by a flash of white light. Suddenly Akmael was with her, the heat of his hand upon her throat, the strength of his fingers intertwining in her hair, the demand of his lips upon hers, warm and full of passion. The magic of the South Woods blew through the window in a humid gust, swirling about them, begging Eolyn to remember who she was and what she once meant to him.

Akmael kissed Eolyn until she had no more breath to give. Then he paused and held her close, their foreheads touching as her fingers traced the familiar prominence of his cheekbone, the line of his jaw, the curve of his full lips.

All she could hear was his desire, carried on the rhythm of his heart. She dared not speak, for if she did, she might stumble upon words of caution or prudence or common sense, and none of that had any place here. Not when he was so near, nearer than he had been in such a painfully long time, closer than he might ever be again.

This is a gift from the Gods, Akmael had once said. To deny it would be an insult to them.

She hushed him with a kiss. 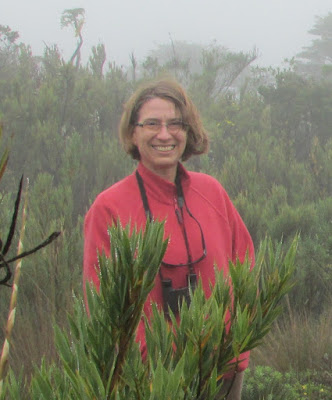 Karin Rita Gastreich writes stories of ordinary women and the extraordinary paths they choose. She lives in Kansas City, Missouri, where she is part of the biology faculty at Avila University. An ecologist by vocation, Karin has wandered forests and wildlands for over twenty years. Her past times include camping, hiking, music, and flamenco dance. In addition to THE SILVER WEB trilogy, Karin has published short stories in World Jumping, Zahir, Adventures for the Average Woman, and 69 Flavors of Paranoia. She is a recipient of the Spring 2011 Andrews Forest Writer’s Residency.

Purchase link for SWORD OF SHADOWS, Book Two of THE SILVER WEB: https://www.amazon.com/Sword-Shadows-Silver-Web-Book-ebook/dp/B01G5L1GEG/

Purchase link for EOLYN, Book One of THE SILVER WEB: http://www.amazon.com/Eolyn-Silver-Web-Book-1-ebook/dp/B01B8F4G50/

Karin will be awarding a $15 Amazon or B/N GC to a randomly drawn winner via rafflecopter during the tour. Use the link below to enter.