An Interview with Christina Lorenz, Author of Healing Seas 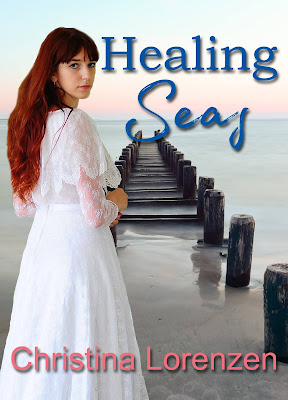 Welcome to my blog. Today I have a special guest Christina Lorenzen. Christina came today to talk about her new release Healing Seas. Christina, thanks for coming.


1.     What was your inspiration for your new book?   This was my first historical book and I had always wanted to write a pirate story. But as I got deeper in research for my chosen time period, which was 1702, I began to doubt I could pull of the dialogue and particulars of the time. I then thought about moving ahead to the early 1900s. I had recently watched the Titanic with my daughter. Whenever we watch it we remember my husband’s grandmother, Dorothea, who had waited eagerly for the movie to release in 1997. The titanic sank April 14, 1912 and she was born March 3, 1912. She loved talking about all the stories she’d heard about the sinking as a young child. I believe she was already in her mid eighties when she finally got to see the movie with my mother-in-law. Thinking about her passion for the movie and an event that happened around her birth, I decided that I would not only write about 1912 but I would make my heroine a survivor of the Titanic.

2. Which of all your books is your favorite?   This is a tough one because as an author I feel like all of my books have become my children. However, I think if I had to pick a favorite, besides Healing Seas, it would be my full length novel, Harvest Blessings. The fall is my favorite season and I had so much fun writing a story that centered on a fall apple orchard.

2.     Besides yourself, who is your favorite author in the genre you write?    Well, no buttering up here but I have all of your books and they’re terrific. (Thank you, Christina!!) I also love Sandra Sookoo, who is a prolific author with 65 books. I haven’t made my way through all of them but I intend to. I love Jill Shalvis, Kristan Higgins and my all-time favorite Debbie Macomber, who inspires me in life and in my writing.

4. What's the best part of being an author?   For me, the best part is being able to work from home and live in worlds beside my own. I love creating characters who live a life completely unlike my own and I love creating small towns because it’s my dream to move to a small town somewhere one day. I also love getting emails from readers who tell me they not only loved my book, but want to know if I’ll be writing a follow up because they want to know what happened to the characters.

5. Could you give us all your links so we can find you on the web?   Sure! Readers can find me in several places, and I’m active on all social media every day. If you contact me, I’ll be sure to get back to you quickly.

In just a matter of days, Addie Mayfield’s life is upended. Through an arrangement her father makes, she sets sail on the RMS Titanic as governess to the two young Fairchild children. When tragedy strikes, she finds herself rescued alongside strangers on the RMS Carpathia, headed for New York City. Far from home, she is taken in by the O’Reilly family to wait for her family to send for her. With no money for her passage home, she’s brought to the small hamlet of Montauk to become a caretaker for a great aunt she has never met.

Captain Frank Shea is a man without a ship. Removed from duty as captain of the RMS Morrow, he’s come to Montauk to recover from a leg injury. More painful than the injury is his fall from grace after spending his entire life at sea. The ocean was his home and he has never needed anyone. Now faced with an uncertain future, he’s desperate for a way back to the sea. Until he meets Addie Mayfield, a woman who is just as lost as he is.

Can these two people find hope for the future after all they’ve lost? Can an unexpected love heal two broken souls?

The slender arm dropped to her side and she stood in his full view now. The form fitting fabric of the dress hugged the curves of her slender body, giving her a vulnerable look. Her head was cocked to one side, her lips parted slightly as if she was unsure about pursuing the matter with Tillie.
"No, I don't have time to wait. Please let her know that I'll be by in the morning for it." He turned to go, thought a moment and turned back to face her.

She looked frozen in place, some odd force keeping her from going back to what she was doing. There was an odd look in her eyes, and if he didn't know better, he would think she was trying to place him. As if she'd seen him somewhere before. Realizing he'd forgotten his manners, he snatched his hat from his head and held it at his side. He would have remembered a beautiful woman like this.
"I apologize for being so abrupt. I'm Frank Shea. Captain Frank Shea. And you are?" He stuck out his hand, hoping she'd see it as the apology he was trying to offer.

He had to lean in to catch the faint words. She stared at the hat in his hand and then her eyes met his. A shaky pale hand reached out and accepted his.  Her hand felt cold and clammy for a warm summer day. He gave it a gentle shake.

"Nice to meet you, Addie. I'll see you tomorrow morning." He released her hand, tipped his hat and turned to go.

He walked across the expansive green lawn and stepped on to the dirt road that he'd become familiar with since his stay at the Third House Inn. Tillie's house was a short walk from the inn. He had only to walk the dirt and gravel road for twenty minutes or so. He'd have made it back to Third House faster, had it not been for his gimp leg. He hoped the doctor was wrong and that the limp wasn't a permanent reminder of the injury he'd suffered because of his own foolishness. As he began to navigate the dirt and gravel back to his temporary resting place, he glanced back at Tillie Mayfield's house, surprised to see Addie still standing in the doorway. Why was she watching him? He had to wonder if the owners of the Third House Inn, Charles Cooper and his wife, had arranged for the young woman to help Tillie while she recovered from the influenza. He'd just begun working on the yard two weeks ago and hadn't seen her before. He hadn't even seen Tillie herself, but the woman had left his last two wages in an envelope in the mailbox as Charles Cooper had promised she would.

Christina, thanks again for sharing with us, and thanks for your kind words about my own work. Good luck with your new book, and come to see us anytime
Posted by Elaine Cantrell at 6:30 AM