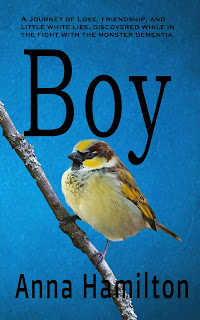 Boy is a story about a few weeks in the lives of Hugh and Betty Roberts, an elderly couple living alone on a family farm in Iowa.  They are buried deep in grief over the loss of their only child and struggling to hang on to  the only life they have ever known when dementia sneaks in.  An unusual visitor brings a welcome distraction and reprieve just before the Thanksgiving holiday.

Join this couple and other unforgettable characters as they prepare to share in a memorable and much needed Thanksgiving gathering at the old couple's farm. What transpires is credited to friendship, love and the relentless power of hope. Directly or indirectly we are reminded of what really matters on this brief walk we call Life.

He had just finished the last bit of paint on the sign when the phone began to ring, startling him.  He hurried into the kitchen to grab a paper towel to wipe the paint off his hands, but before he could get to the phone, the ringing had stopped.  He heard Betty say "hello?"

With all of the strange happenings lately he shouldn't have been surprised that she'd answered the phone.  Anything was possible, he thought as he walked back into the room and burst into laughter when he saw that she hadn't picked up the phone at all, but a statue of Roy Rogers that sat next to her on the end table.  She was holding it up against her ear, as if waiting for someone to answer her greeting.

Sitting Roy back down on the table she said, "They hung up."

"They'll call back," he said laughing.  And they did call back, but by then Betty was no longer interested.  She had faded away again.

2.Tell us about the publication of your first book.
3.Besides yourself, who is your favorite author in the genre you write in?
4.What's the best part of being an author? The worst?
5.What are you working on now?

#1.Yes, as a matter of fact I did beginning with the two children’s stories I wrote in the 80s. With that said, it wasn't necessarily because I wanted Anna Hamilton to be known, but the stories and the guts of them to be known. Always the message for me.

#2.I first self-published Boy, which at the time was enough for me. Fame is not what I am after. I felt as I do today that the message I am trying to relay in this story is important and I wanted it 'out there' for that reason. What I found is that it wasn't getting out there fast enough based on the number of people who are touched by both Alzheimer’s and Dementia.  It seems to be an epidemic and getting ahead of it is vital, even if that just means with knowledge that will help a caregiver and family member cope.

#3.To be honest, the genre that Boy has fallen under "Elder Care '' is unfamiliar to me, which means I am equally not familiar with authors in that same genre. When I was desperate for information during my father’s illness, I didn't seem to find the information I was looking for. That was because due to the deep sadness and helplessness, I was looking for something that did not exist—which was a solution, a way to make everything better—and during the process of “being present” with my father I found it the hard way.  It was all about going into his world, no matter how mixed up it seemed. Trying to pull someone back into our world when they have partially left it sets one up for defeat because it is impossible.

#4.The best part is having a reader “get” the message I am putting out there. Having them tell me how they relate to this part or that part of the story is rewarding and the entire goal of whatever I write about.

#5.I am working on five stories at the moment, all started during the pandemic.  A time when I could be at home in the quiet of my space. The sequel to Boy is on my “get back to” list, but then Red Van is one I am most eager to complete. It’s a true story of how two men, both my step fathers at one point and ex-cons, came into my family's lives and how their destruction and dysfunction changed us forever. 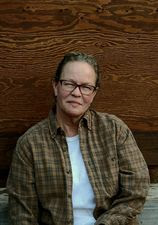 Anna Hamilton (1958- present) was born in Des Moines Iowa. She lives in Northern Minnesota along the Canadian border where she owns and operates a small restaurant in the village of Grand Marais. During the slower winter months she writes, preferring fiction over non-fiction. "Fiction" she says, "is much easier to create because you can be on the outside of a story looking in, rather than on the inside, fighting your way out." Hence her first novel 'Boy'.

When she is not working or writing, her time is spent mentoring children in need and advocates on behalf of both children and the elderly. She and her sister Sarah are currently working towards building 'affordable' housing for their community. Part of the proceeds from her first novel 'Boy' will be dedicated to help finance that project.

Anna Hamilton will be awarding a $25 Amazon/BN GC to a randomly drawn winner via rafflecopter during the tour, in addition to the gift card, the author will offer a prize to a second winner: a store coupon from Between the Lines Publishing/Liminal Press (half price print book or free ebook).

Thank you so much for hosting 'Boy'. I wish for all who read this story to relate to the simple and sometimes sad, sweetness. As our parents told us growing up "life is not fair' something we all find to be true in time, a fact that forms backbone and strengthens this journey. Have a great day! Anna

It was my pleasure to host you today!