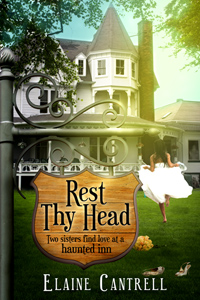 Jake finished brushing his horse and affectionately stroked the chestnut’s neck. “You’re a good girl, Cinnamon” he muttered. He turned her out into the pasture to graze and stood beside the fence, watching her as she rolled on the ground. So much for his grooming job.

In spite of himself, he remembered how Peyton’s hand had felt when she grabbed his. He had forgotten how soft a woman’s hand could be. If only she hadn’t touched his scarred side. His rough, ugly hand surely hadn’t felt normal to her.

The corners of his mouth turned down. What did it matter? He could hide the scars on his leg and arm, but nothing could help his face. His scars had shocked Peyton the first time they met. He needed to get his mind on business and stop thinking about women. No woman would want a freak like him in her life.

He could barely stand to look in the mirror at himself, so he couldn’t reasonably expect a beautiful woman like Peyton to look at him without revulsion. Sweat trickled between his shoulder blades. He had other scars on his arm and leg she hadn’t even seen.

A muscle jumped in his cheek. Forget Peyton. Nothing could come of it. He might as well groom Patrick’s horse too.

Excerpt: We are picking up in the place we left off last time. Patrick is Jake's brother.

Patrick had taken a group out riding earlier in the day and hadn’t had time to brush the animal. When he went back into the barn, he found Patrick had already started the job. “Hey, Jake. I thought I’d help you with the horses.”

Patrick grinned at him. “I’ve been meaning to talk to you.”

“Yeah. I was thinking of asking Peyton O’Malley to go to a movie with me. Do you think that would be wrong since she works here? I don’t want to cause any problems with the staff, but I think it would be fun.”

Jake felt as if Patrick had shoved a knife into his gut and was slowly twisting it back and forth. He had to swallow hard before he could speak. “No, it wouldn’t be wrong. Ask her.”

Patrick smiled and patted his horse’s neck. “I think I will. She’s a lot of fun, isn’t she?”

Patrick finished his horse and put away his equipment. “I’ll ask her tonight. Tomorrow’s Thursday, and that’s usually a slow day. We could catch a matinee, and then I could take her to dinner, but not at the inn.”

Patrick went back to the house, but Jake spent the next ten minutes savagely pelting a tree with acorns.