This post is part of a virtual book tour organized by Goddess Fish Promotions. W.M. Akers will be awarding a $50 Amazon or B/N GC to a randomly drawn winner via rafflecopter during the tour. Click on the tour banner to see the other stops on the tour.


Check out the Kickstarter Campaign for this project. 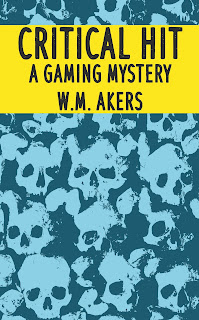 How do you win a game that’s trying to kill you?

A twenty-nine year-old clerk at a games store in the Appalachian hamlet of Jett Creek, Tennessee, Callie Myles lives for the weekly RPG sessions run by her beloved brother and gamesmaster, LB. Under his watchful eye, she and her friends wage war, harness magic, and battle evil. When the dice are rolling, they are heroes, and all of Callie’s anxieties slip away. The fun stops the night LB burns to death in a bizarre fire.

Asked by her friends to keep the weekly game alive, Callie does her best to set her grief aside. She puts on the monocle LB wore during sessions and finds herself sucked into a life-sized recreation of her brother’s game. Inhabiting the body of her beloved character, the legendary Arabeth, she thinks she has found the ultimate escape. Her paradise is spoiled when she discovers that something inside the game killed LB—and one of her fellow players was in on it.

To save herself, to avenge her brother, Callie Myles must pull on her armor and beat LB’s game from the inside out. If she gets killed along the way, well, at least she’s having a great time.

A fast-paced hybrid of mystery and adventure, CRITICAL HIT captures the breakneck joy of tabletop gaming, where life and death depend on the whims of a plastic die. It will be on Kickstarter from May 25 to June 25, and available on DriveThruFiction and Amazon after that.

Somewhere far from Blackbriar Keep, a barricade of empty beer cans and crumpled chip bags ringed a plastic castle. On the white grid that represented its muddy courtyard, four one-inch miniature Heroes were locked in deadly combat with the dozen figurines that represented a Horde of thousands. They were beautiful little figurines, but all eyes were on the other end of the table. Nothing mattered but Arabeth.

She had one leg raised, her bowstring drawn taut, and a look of extreme do-not-fuck-with-me on her face. I’d spent twenty-two hours painting her, deploying all my tricks to bring her plastic to life. From her forest green boots to the curls of her rich brown hair, every millimeter was perfect. Tonight, perfect was what it would take.

It was April 2003, when tops were cropped and pants were cargo, when fedoras and trucker hats still seemed like good ideas, when America was already getting bored with its new war. More importantly, it was a Thursday, which meant the back room at Critical Hit was ours. Stale beer and smoke polluted the air. Imitation wood paneling peeled from a drop ceiling that was nearly as stained as the pea green carpet. The walls were close, or I guess the table was too big, because you couldn’t shift your seat without banging into one or the other. Absolutely no breeze drifted through the little window on the far wall. Grimy lace curtains hid us from the rest of the games shop. It was a pit, but it had to be the happiest pit on earth.

The man who brought magic into that little room sat at the head of the table. One hand rested on his gut; the other twisted a beard flicked with red ale. His eyes—one bare, the other behind that ridiculous monocle—were slits. A playful smile drifted across his face as he tried to figure out what might happen next. He looked like a big, gentle grizzly bear. A stranger might have mistaken him for just another geek. They’d never have guessed that my big brother was the greatest gamemaster in the world.

“You sure you want to do this?” he asked.

“I think I already have.” 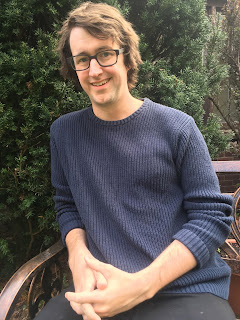 W.M. Akers is a novelist, playwright, and game designer. He is the author of the mystery novels Westside and Westside Lights; the creator of the bestselling games Deadball: Baseball With Dice and Comrades: A Revolutionary RPG; and the curator of the history newsletter Strange Times. Born in Nashville, he spent a lucky thirteen years in New York before moving to Philadelphia in 2019. Learn more about his work at his website.

Hey! W.M. Akers, the author, here. Thank you so much for hosting! If anybody has any questions about Critical Hit or writing generally, post them and I’ll reply!