The Confederacy Is On Her Way UP the Spout 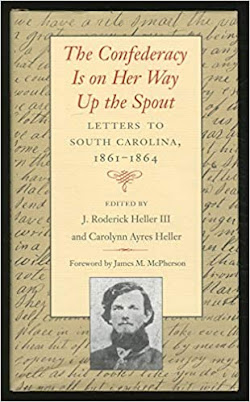 I recently made a trip to our local library and found a civil war book that looked pretty good.  It’s called The Confederacy Is On Her Way Up the Spout .  I did enjoy the book, but it made me think about what it might have been like to have lived during the Civil War.  Of course there was always the risk of losing a loved one, but just think of the families that split over the issue with one side picking the North and the other the South.  Talk about a family feud.  Anyway, I decided I’d do a post on the Civil War.  Hope you enjoy it.

Soldiers often enjoy sending and receiving letters.  In previous wars before censorship, email, and cell phones, their letters were often a source of information about the progress of a war.  They also explained how a soldier spent his days and nights.

Between the years 1861 and 1864 Jesse McMahan and Lucretis Caroline Barrett McMahan of Pickens County, South Carolina, received numerous letters from a family of Confederate soldiers-three brothers and a brother-in-law.  The soldiers were yeoman farmers whose education was limited as you can see from their spelling and punctuation.  You can also see the soldiers' outlook change as the war proceeded. Unhappily, none of the four survived the war.

Excerpts from the letters are listed below and shed light on what it was like to be a soldier in the Confederate army during the American Civil War.

…a sholger nows but little moar what is a goin on than you do only in his own ridge ment or when he receves orders to march and than he don’t know whether hit is for a fight or to change en campements til he sees the enemy.  Only by the movements of the armey he can give a perty close gest.  i know that tha is fifey Thousand shoulgers in camp hear and sixteen Hundred yankee prisoners hear but I don’t know ho long we wil stay her nor wher we will go to next.

Dear Brother and Sister-Thrue the kind provadents c. and all wise god I am enjoying good health while many of my Brother solgers has sicken and dide hoping thes lines may find you all well.

every thing seams still today.  The same auld tail keep two days rashon cook.  we have bicets that is so hard I could nock a bull down with one.  hit is raining this eaven an the wind a blowing a prospeck of a stormey night.

It a snowing on the morning of the eight long be for day.  the role beat we was up and on march by six.  the snow had turn in to heavy rain.  it continued to rain all day.  ten thousand of us on march the mud and water nea deep in a heap of places and small stream to wade.

the Yankees made a heavy actact on williamsburg at 11 on monday.  tha was 3000 ingage on boath sides.  the fight lasted tel 6 in the even.  the Yankees reinforce all the time and no reinforce got to our toops tel five in the even.  our troops won the fight.  drove the yankees back with grate slaughter.  hit was a hard and bloody battle.

it was a sight to see the battlefield, the dead was a lying thick over a bout one hundred achors of ground and strange to tel but no les strange than true the heaps of the dead to make brest works to sight behind.

There is nothing more but Sorrows & trubles to be seen.  Oh I will be glad when it is gods will to restore Peace to our unhappy & distressed country.

the soldiers has a by word when any body dies or anything lost saying its gone up the spout.  tell Washington that I say the Confederacy is on her way up the spout.  nothing mor