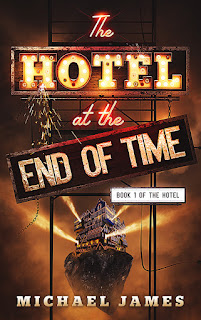 No one has ever escaped from the Hotel at the End of Time. Until now.

Vain only wants to be left alone, but the Hotel has other plans. Forces will align against her: a group of multi-dimensional felons collectively named The Wyatts; and their leader, Trick, a mild-to-medium psychopath with a fondness for impractical jokes.

The only way forward is to go back. Back to the one place in the world she swore she'd never return.

Back to the Hotel.

Blurb for:  The Hotel at the End of Time:

Vain is the only person to ever escape from the Hotel at the end of time. On her way out, she took their prized possession: A Padlock that grants immortality.

They will do anything to get it back.

The forces of the Hotel are aligned against her: mundane items turned into weapons; a group of multi-dimensional felons collectively named The Wyatts; and their leader, Trick, a mild-to-medium psychopath with a fondness for impractical jokes.

Everything changes when Vain meets Emma, a timid grad student with impossible and terrifying powers. Together, they are propelled into an adventure that will see them battle the Wyatts, blow up several objects of significant value, and quite by accident, discover a way to stop the Hotel.

Even with Emma, Vain has a lot of problems to deal with.

She’s exhausted from being hunted.

She has a hangnail.

But Vain is resourceful. Vain is clever.

And she always has a plan. 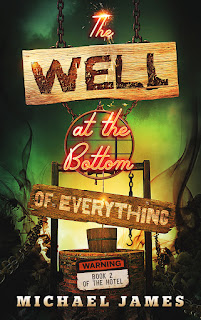 Blurb for:  The Well at the Bottom of Everything:

Vain thought destroying the Portal to the Hotel at the End of Time would mean freedom for her and Roman, but her happy ever after is coming to an end.

A horrible mistake and a stray bullet force her to infiltrate the Hotel and contend with a new and terrible power: The Well at the Bottom of Everything.

Friendships will be tested. Loyalties will be broken.

The Hotel will have its revenge.

The Hotel at the End of Time

The woman glanced over. “I’m Emma, by the way. Thank you for helping me.”

Emma blinked and positioned the rear-view mirror so it showed Vain her reflection. “Is that better?”

Vain shook her head. “My name. My actual name is Vain.”

“They’re not men,” replied Vain. “They’re things. Their name is Wyatt. Their only job is to find people like you and take them back to a place called the Hotel. It’s a place I escaped from.”

“How are they all called Wyatt? Why do they look the same?”

“They’re from alternate Earths.” Vain waved her hand, shooing away the explanation.

“I don’t believe you,” Emma said. “I’m sorry. I know I’m supposed to humor crazy, but I’m exhausted. Please tell me the truth.”

“How about this? You go first. Explain how you threw a person with your mind in a way that doesn’t violate a couple dozen natural laws, and once you’re done, I’ll come up with a better explanation for duplicate psychopaths from various incarnations of Earth.”

The Well at the Bottom of Everything

“Can I help you?” The perky girl behind the counter smiled like she enjoyed her job. Vain was immediately suspicious.

“Sure, what size? We have mediu, moyen and mittel.”

“Are those real words?”

Vain waited for a further explanation. Sweat pooled in her lower back. The man behind her coughed, and she nearly jumped. The perky girl offered no further details, but smiled more aggressively. Vain examined the menu for clues with growing distress.

“I don’t know. The third one. Mitten. Two mitten coffees, I guess. Oh and Mark said he wants an everything bagel, but I’m not sure if he meant he wants all the bagels or if he wants everything on the bagel.”

“One everything bagel and two mittel coffees. No problem. How do you take them?”

Vain wiped her forehead. A car started outside the shop and she bit her cheek. “In my hands, please. That’s fine. Hurry.”

“Yes, okay. Give me two mitten coffees with cream and sugar and all the bagels in my hands. Here is some money. I’ll be on the couch.”

Not at all. I wanted to be a ninja that drove around North America in a camper, entering chili contests and solving crime. My plan was if I wasn’t making cash winning chili contests, I’d just turn to ninja-ing or crime solving.

So as it turns out, none of those pay. Like not a dime. Apparently ninja’s mostly work on codes of honor and like people don’t pay you to randomly solve crimes. Mostly they get irritated and call the police (who are, in fact, paid to solve crimes).

I honestly have no idea how to answer this and I’ve been doing interview questions all night. Of all the questions I’ve gotten, this one has thrown me the most.

So, I wrote a book, step A. Then I uploaded that book to Amazon, step B. Then I hit publish. A couple hours later my book was on Amazon. I expected fanfare, or maybe like a heavenly chorus, but nothing. My wife said congratulations and gave me a hug and that was pretty sweet, I’m not going to lie. My wife gives awesome hugs.

3.Besides yourself, who is your favorite author in the genre you write in?
Douglas Adams.

I’m trying to learn how to play “Stay” by Lisa Loeb on the piano. It’s a wonderful song. 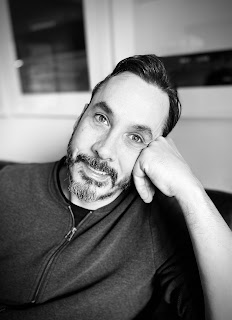 Michael James spent his formative years writing, and when he wasn't writing, he was writing. A mistaken belief that a "real" job would be more satisfying led him down a dark path that did not involve writing but did involve meetings. Fortunately, he has since course-corrected and is back on the right (write? Ha!) path. The Hotel at the End of Time is not his first book, but it is the one with the most Hotels in it.

He lives in Canada with his family. When he's not writing, he does Canadian things - saying sorry a lot, being polite, talking about the weather, you know how it goes.

The Hotel at the End of Time: https://www.amazon.com/dp/B08QG59SXL

The Well at the Bottom of Everything: https://www.amazon.com/dp/B095CL2T6H

Michael James will be awarding a $50 Amazon or B/N GC to a randomly drawn winner via rafflecopter during the tour.

Sounds like an exciting book. Are there any other genres you'd like to write? What book are you working on now? Thanks for sharing an excerpt!