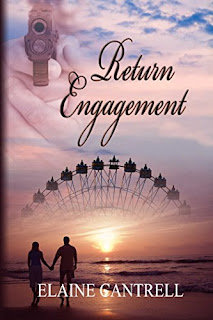 Welcome to Saturday Sample and Weekend Writing Warriors. I'd like to thank everyone for the nice comments you've left about my WIP. They were encouraging to me, and I received some excellent advice. Again, thank you.

Today I'm staring excerpts from Return Engagement, my first book about the Lovinggood family. I've already shared some of the first part so I'll be doing a little jumping around. First a blurb, then that excerpt. Oh, and on Sunday when you finish here go to www.wewriwa.blogspot.com for more excerpts from a talented group of authors.

Mrs. Lane knocked on Elizabeth’s bedroom door around nine the next morning. “Are you going to sleep all day?” she called as she entered the room and drew back the drapes. Sunshine flooded the room as a flower-scented breeze wafted into the room.

Elizabeth yawned and stretched. “Good morning. I didn’t mean to be so lazy, but I couldn’t sleep last night. I had a lot on my mind, I guess.”

She got out of bed and stretched again, and her mother passed her robe to her. “I’m going to get breakfast. What do you feel like?”

“Oh, grapefruit and toast. Coffee too.”

Mrs. Lane paused for a moment when she saw Elaine Lovinggood’s card lying on Elizabeth’s night stand. “Have you decided whether or not to call Mrs. Lovinggood?” She indicated the card with a nod of her head. “She seems awfully eager to meet you.”

Elizabeth sat back down and poked her lip out. “Mother, why did she have to come here? She must know I don't want to see her."

Today's Excerpt: In this excerpt my hero Richard plans a special day for Elizabeth. You won't see what it is today because I like to start at the beginning of a chapter with my excerpts. Elizabeth and Richard married in haste, and due to no fault of their own, things aren't going well for them.

“I’m sure she does, but she came anyway, honey. Maybe she thought she could help you and Richard patch things up.”

“I doubt it.” Elizabeth scowled ferociously. “She probably wants to fuss at me because I’m not living with him.”

“You’ve had weeks to think about it,” Mrs. Lane pointed out. “Have you decided to get a divorce?”

Elizabeth’s shoulders drooped. “No, I haven’t made up my mind about anything.”

Hastily, she changed the subject. She didn’t want to even think about Richard, much less talk about him. “I’m starving, Mother,” she hinted.

Mrs. Lane rolled her eyes. “I knew you wouldn’t talk to me. In that one respect you do resemble your father. He had an absolute genius for dodging unpleasant confrontations, but in this case ignoring the problem won’t make it go away. Your husband isn’t the kind of man you can dismiss and pass off to your lawyers. No, Richard’ll demand a face-to-face meeting, and if things don’t go his way I shudder to think what he might do.”

Elizabeth scrambled out of bed. “I have to go to the bathroom. ”

She really is good at avoidance of the issue at hand. I hope her mother will make her see that it won't solve anything! A hard lesson to learn for some. Great snippet! Tweeted.

Yes, she is avoiding the issue with everything she has. I wonder what it will take for her to face it.

I wonder if there's skullduggery going on behind the scenes. :-)

Interesting scene! I love her avoidance.

Quite the situation she's in! Enjoyed the excerpt.

Sadly - avoiding the issue never makes it go away.
Tweeted.