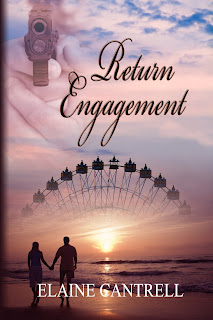 The doorbell rang just as she joined her mother in the kitchen. She looked out the window and saw a blue delivery van sitting in the driveway. “Who’s that?” she asked. Her heart had picked up a little speed. Ever since the kidnapping, unexpected happenings made her nervous.

Elizabeth fumbled for the card which had accompanied the flowers. “They’re probably from Alex. He knows how I love roses, but I’m surprised he’d send red. He knows I like yellow ones better.”

She read the card and wished she hadn’t. She should simply have ignored it. “They’re from Richard, right?” Mrs. Lane asked.

“Look at the envelope. Only one person would have sent the roses to Elizabeth Lovinggood instead of Elizabeth Lane.”

Elizabeth passed the card to her mother as her stomach knotted. The vague, ill-defined anxiety she had lived with for the last six weeks threatened to choke her. She had wondered how long Richard would leave her alone, and now she knew. She only prayed he wouldn’t arrive in person a few minutes from now.

“Elizabeth, In the language of flowers, red roses stand for love. I do love you. Are you ready to see me yet? Richard. ”

“That’s a good question,” Mrs. Lane avowed. “Are you ready to see him? Wouldn’t it be better to get it over with? You have to do it sometime.”

Elizabeth stirred restlessly. “I don’t know. In one way I want to see him so bad I can taste it, but when I think about him, I break out in a cold sweat. Just seeing his name on the card makes my heart race.” She gave an unhappy little laugh. “I wish I knew what the trouble is.”

“Does seeing him trigger flashbacks?”

Mrs. Lane passed Elizabeth’s card back to her. “If I were you, I’d get ready for a meeting. I think his patience is almost gone. I’ve been expecting him to make a move for some time now. I’m sure the roses mean he’s ready to claim his wife.”

“Yeah, you’re probably right,” Elizabeth sighed. “Patience has never been one of Richard’s virtues. It surprises me that he stayed away as long as he did.”