Christmas At The Cove 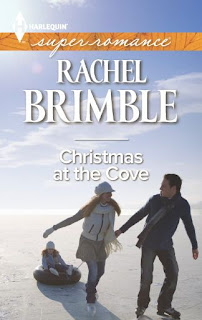 Scott Walker doesn't have time for a relationship. The sexy mechanic has career ambitions, not to mention a mother and three sisters to take care of. The last thing he needs is Carrie Jameson, the beauty he never forgot, arriving in Templeton Cove over the holidays with some unexpected news.

Scott still finds Carrie irresistible, and he's not one to shirk responsibility. Scott's issues with his own dad make the prospect of parenthood a minefield. But if he and Carrie can overcome their fears, this Christmas could bring them the best gift of all.

She glanced around the garage. “I’m sorry to turn up unannounced like this, but I’m here and we need to talk.”

He stared at her in disbelief as questions, demands and weaknesses hurtled around inside him, battling with the intense sexual frustration storming through his body. “Just like that, you turn up and say, ‘We need to talk’?” He shook his head and turned away from her, lest he get caught in the snare of her wide, impossibly gorgeous eyes. “Go away.”

Keeping his back to her, he uncrossed his arms and planted his hands on his hips. He tipped his head back and smiled as insanity rushed his bloodstream. He wanted to grab her, shake her, kiss her and make love to her. God, he wanted to drop to his damn knees in front of her and beg her to tell him where she’d been and now she was back, was she back for good?

He closed his eyes, barely resisting the urge to cover his ears with his hands and block out her tempting voice, achingly laced with the unmistakable sound of a plea. “Whether you want to see me or not, I have to talk to you, and I won’t leave the Cove until you hear me out.”

Her heels clicked closer and his body tensed, waiting for what came next. The dangerous, musky scent of her perfume wafted under his nostrils and he inhaled. She approached the bench beside him and put down a business card. “My number’s on there. I’m staying at the Christie. Call me when you’re ready to talk. It’s important or I wouldn’t have come.”

He glanced at the card. Carrie Jameson. Producer.

She turned and walked away. He let her go, feeling like a smashed up car after a hurricane, tossed and turned through the air before being spewed crudely across the highway, left to rust and burn.

He picked up the card. His hand shook and the rare sting of tears shamed him. What the hell was he supposed to do now? Carrie was back and his libido told him only too clearly there was no way in hell he wouldn’t go to her. How was he supposed to let her go a second time when he’d lived the last three years regretting he didn’t stop her the first time?

My Most Memorable Christmas…by Rachel Brimble

I love Christmas once all the presents are bought and wrapped, the cards sent out and the decision of where we’ll eat the all-important Christmas lunch has been decided. We tend to alternate Christmas lunch either at my mother-in-laws or hosting my parents and my in-laws at our house.

One of my memorable Christmases was 2010.

In June of the same year, my husband, two daughters and I (along with family friends) were caught up in the unexpected and terrifying French floods. This resulted in us being evacuated from our holiday caravan and, after a twelve-hour ordeal of waiting and worrying what would happen next, we were eventually rescued by helicopter from the clubhouse roof.

We lost all our belongings, passports and my engagement ring, but thankfully got home relatively unscathed. We were very lucky. Twenty-five people lost their lives that day…

The reason I will never forget this Christmas is because the ripple effects of the ordeal were still very much within us when my husband stood up at the dressed Christmas dining table and announced he had a surprise present for me.

I had absolutely no idea what was coming next!

From behind his back, he produced a small velvet box…and inside was a brand new, diamond solitaire engagement ring to replace the one I’d lost in the flood. Suffice to say, I promptly burst into tears as the rest of my family cheered and clapped.

Definitely a Christmas to remember and be thankful for! 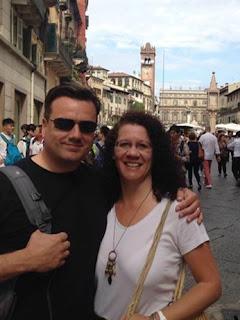 Rachel lives with her husband and two teenage daughters in a small town near Bath in the UK. After having several novels published by small US presses, she secured agent representation in 2011. Since 2013, she has had five books published by Harlequin Superromance (Templeton Cove Stories) and three Victorian romances by eKensington/Lyrical.

Rachel is giving away a $25 Amazon/Barnes and Noble gift certificate to one lucky winner. Use the Rafflecopter link below to enter.

Hi Elaine! Thanks for having me here today - I look forward to chatting with your visitors :)

The thing I loved about the place I grew up was the sense of community. I think due to technology and the advent of phones/tablets etc people talk less and less to their neighbours, which is such a shame. All the kids would call the other mums and dads in the street Auntie or Uncle and we all looked out for one another. What I loved the least was the lack of countryside. I lived on the outskirts of the city of Bristol, England so it was a very urban area, whereas nowadays I live in a much more rural area which I love...plus, Bath is only a short 30 minute drive away!

Thanks for stopping by :)

Thanks for stopping by :)

Hope you'll give the book a try :)

Enjoyed the excerpt. Thanks for the chance to win.

Glad you enjoyed it - good luck :)

Enjoyed the post, sounds like a great book, thanks for sharing and good luck with the tour!

Hi, Eva, Cali, Betty & Mary Ann! So sorry I missed your posts yesterday - that's the trouble with these pesky time differences, haha! Great to see you here and so glad you enjoy my post & excerpt. Lots of luck with the contest :D

thanks for the chance!