Review: Rescue by a Rogue 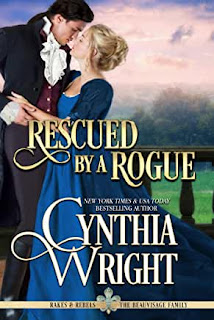 In 1783, the Revolutionary War is ended, and Major Alexandre Beauvisage is making his way home, anticipating a return to the wicked pleasures of his former life. However, while riding through the Connecticut woods, Alec comes upon a boy lying unconscious in the autumn leaves…and closer inspection reveals that the figure in breeches is actually a lovely young woman, suffering from amnesia.

ALONE IN THE WORLD
Against his better judgment, Alec christens the foundling Caroline and takes her with him to his home in Philadelphia. Soon, life becomes increasingly complicated as the fiery attraction between them builds and Caro’s dangerous past reaches out to her.

I do enjoy historical fiction so I decided to give this book a try. Unfortunately, I didn’t like it very much.

The hero is not heroic to my way of thinking. He all but raped a young woman he found unconscious and alone in the woods. She doesn’t know her name, where she came from, or anything else about herself, but none of that mattered. Then to add insult to injury he tells her he’ll be her guardian and find her some nice man to marry even though he’s quite taken with her himself.

The heroine Caroline is better, but she is surprisingly unconcerned about her amnesia. She starts a new life never knowing what she left behind.

I liked the secondary characters better, but I thought they seemed a bit stereotyped.

I know many readers will disagree with what I’m about to say, but I thought the book had entirely too many seduction scenes in it. They weren’t over the top by any means, but I just didn’t enjoy them.

What I did like about the book was the plot. If you read the blurb you know the premise of the story is good. Did I read it to the end? Yes. I wanted to know how it came out, and the ending was satisfactory. The period details in the book were nice too.

I believe that most people will like the book better than I did. I'm just not fond of alpha heroes and too many seduction scenes.