Beyond the Book: Review All Our Darkest Secrets 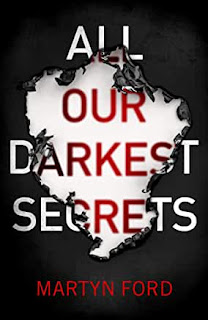 He’d do anything to protect his wife. But what if that meant making the biggest mistake of all?

James Casper is one of the good guys. A DEA agent. A loyal husband. With his sights set on the man at the top of the city’s opioid crisis, James is about to make the biggest bust of his career.

Then his beloved wife Rosie does something terrible, and James must choose: report it—or help her. He knows how this works, and he tells himself he’s smart enough to get away with murder. But James’s worst enemy knows what they have done—and he won’t hesitate to use it to manipulate him.

James is dragged into a dark and dangerous world. As events spiral and loyalties are tested, he realizes there’s only one way out. And that is to be even more ruthless than the people he’s working for.

Whatever happens, no matter how far he falls, at least he’ll still have Rosie.

Some years ago I asked my husband if I committed a crime would he help me cover it up. He laughed and said it would depend on what I’d done. Seriously, though, I think he’d help me. I don’t know why I asked him that question, but it’s the reason I chose to read this book. I wanted to know what James did and how it all turned out. It really was fascinating.

The book is definitely a dark thriller. In places it read like a gritty, old fashioned detective novel. It moved fairly rapidly, the plot was intriguing, and the characters well drawn. At first I didn’t like the writing style because it moved from present to past to present to past over and over again. However, as I read on I saw that it truly was effective. Without those flashbacks you wouldn’t know things that explained a lot about Rosie who committed the terrible crime. They also helped you to understand James and why he made the choice he made. I have to admit that from page one I didn’t like Rosie. I enjoyed watching how James’ choice led him down a truly frightful pathway.

In spite of all I’d read I didn’t see the ending coming. I was actually shocked when I finished it. Maybe someone else guessed the ending, but I sure didn’t.

One thing, though. The language isn’t nice. There are some words in there, one word in particular, that we don’t use at our house. If that bothers you this may not be the right book for you.

If the book hadn’t been free I would probably never have read it, but overall I’ll have to say I’m glad I did.