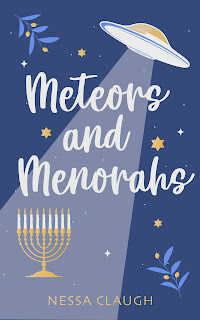 'Your dad invited your ex-boyfriend.' Already committed to going home for Hanukkah, Leah panics at her mother’s text and invites her crush to come with her. The catch? They aren’t dating. The other catch? He isn’t Jewish. He isn’t even human.

Knar has been studying the physiology of humans for years in preparation to introduce Earth to the rest of the galaxy and present them as a species that can adapt to change well. Although he believes in his mission, he’s also had his eye on his coworker Leah, and her invitation to come home with her for the holidays is just the opportunity he’s been looking for.

Going home for Hanukkah is normally the least of Leah’s worries until her mom lets it slip that her dad invited her ex-boyfriend. Desperate to keep him at arm’s length, Leah invites her handsome coworker Kenneth Knar to be a buffer against her family. Having to pretend he’s her new boyfriend doesn’t hurt, and if it annoys her parents, all the better.

He just has to find some way to tell her that he’s more than just a gentile. He’s not even from this planet. And Leah hates liars.

Leah finally came into the kitchen. “You made him lunch? Mom! I was going to take him out to Bernie’s!”

“Bernie’s closed a while ago,” her mother said. “Besides, it looks like you feed him plenty at home.”

She poked my deltoid and Leah blushed. “It’s not like he’s hard to cook for,” she said defensively. “Really? Bernie’s closed?”

“Last year,” Deborah said. “If you’d come home more you could have eaten there more before they shut down.”

Leah’s shoulders tightened, and I was starting to see what she’d meant about needing a buffer between her and her family. I’d gotten what she’d promised and more. Time to go to work.

“We have plenty of good restaurants in Kansas,” I said, hoping it would be enough to change the subject. “No food like this, but I’m sure there is food we can get there that we can’t find here.”

Deborah’s lips thinned. “You aren’t eating pork.” It was a statement and she stared at

Leah as though begging her to argue.

Diversion time. I started listing off all the animals you could barbecue, and by the time I got to what I’d read about the invasive reptiles in Florida, both Leah and her mother were suitably horrified to the point where we were off the topic of Leah’s lack of visits and whether she’d eaten pork in Kansas or not.

Ever since I was little. I wrote a short story about a wooden chair that ate my third grade class and while telling stories like that was a hobby that crept in and out of my childhood, I was firmly entrenched in telling longer stories once I was in high school. I started with fanfiction and eventually moved on to my own original work once I had the initial skills of storytelling down. After I discovered Star Wars I moved into the fast paced futuristic worlds of sci-fi, and I love it. I love the settings, I love the possibilities, and I love exploring new worlds.

I had wanted to publish something longer for a while through a more traditional publisher, and I managed to find a press with a sci-fi open world where if you could write something that fit in with their alien empire’s layout and interactions with Earth, you could submit it. What I sent was a novella and while there wasn’t much editing from them, I got the feeling that it wasn’t a major property for them. While the book didn’t quite take off, it also wasn’t a total flop, and I can remain comfortable that it’ll continue to fund a few other tools I use for publishing like Duotrope and the occasional marketing venture.

I keep coming back to Ruby Dixon when I need a break from writing. Dixon is incredibly prolific and while she’s tended to focus on blue horned aliens, she also puts out 10-12 books a year which is an incredible number. Honestly I’d love to pick her brain about how she writes so many stories for the female gaze and does so well at it.

The best part is exploring new places. I love visiting biomes that we’ve never been to and exploring other worlds in our solar system. When I was writing WITHIN ALIEN ARMS, I had a blast reading up on the geysers and ice fissures of Enceladus and trying to bring that feeling exploring an alien landscape to the page.

With writing not being a full-time job for me, trying to find time to write is probably the worst part for me. After working 12 hours, sometimes the last thing I want to do is write. Sometimes I get lucky and can get some writing in at work, but for the most part it’s an off the clock kind of thing.

I’m working on a small-town romance that may or may not have sci-fi elements to it. It has all the cozy bits and bobs that you see in a small mountain town: gossip, support, everyone who knows everyone else’s history, and someone new to town who doesn’t quite understand the culture. 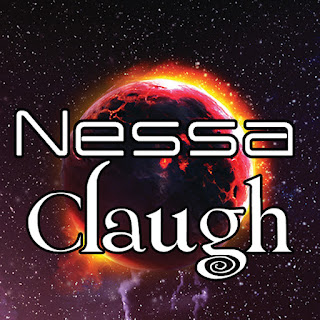 Nessa grew up thriving on trips to natural history museums and Jurassic Park. Once adulthood was upon her, it was only a matter of time before she discovered dominant aliens and shifter erotica. She enjoys titillating the Triassic and stargazing.

Nessa Claugh will be awarding a $25 Amazon or Barnes and Noble GC to a randomly drawn winner via rafflecopter during the tour.

Thank you so much for hosting today!

sounds really good! thanks for hosting