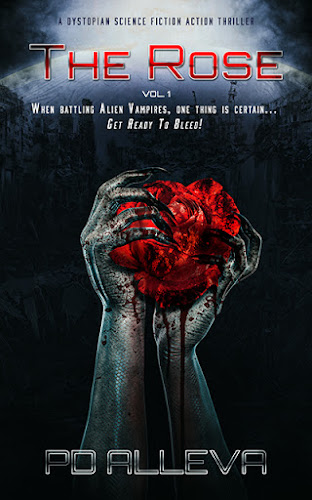 Sandy Cox believed WW3 was over. But for those Alien Vampires, War Has Just Begun.

Forty-eight hours after a World War III treaty is signed Sandy Cox awakens in an underground compound unable to move. Tied to machines she screams for help but no one answers. At least NO ONE HUMAN.

And they’ve taken her unborn child.

Enter Phil, a rebel freedom fighter who has had more than his share of Alien Vampires. Armed with THE BLADES, a sacred alien martial art, he enters the compound on a mission to find Sandy. But as he battles his way through the compound, Phil discovers Sandy has her own agenda. Finding her stolen child is all that matters.

But the vampires have their own plan and Sandy’s baby is at the heart of their diabolical plot. Joined by a crew of rogue soldiers, they must navigate the underground compound, battling genetically mutated humans, aliens and monsters.

When battling Alien Vampires, one thing is certain…Get Ready To Bleed!

Fans of The Hunger Games, George RR Martin, VE Schwab, Star Wars and Ancient Aliens will be fascinated by this high-powered, intelligent, edge of your seat dystopian sci-fi action thriller.

“It’s in the blood, dear,” said Ellen, one of the women Sandy shared time and space with, her skin worn by age, hard labor, and days spent under the sun. Blotches, liver spots and creases led the observer to the eyes. One dark, the other a cataract milky white and she always wore a dark shawl draped over the head and shoulders. Sandy was afraid of Ellen, she reminded Sandy of a gypsy or witch from a fairy-tale.

“Come again?” said Sandy, her eyes shifting from soldier to Ellen to soldier then back to Ellen.

Ellen had cut herself transferring a wood bucket filled with rice to add to an already large trough of buckets. A thick wood splinter pinned in the bottom of her palm dripping with a thick stream of blood. She turned to Sandy raising the bloodied palm and caught a drop of blood in her unwounded hand.

“The blood dear,” said Ellen. “All magic comes from the blood.”

Sandy cringed at the sight; she’d always been squeamish. Her stomach bumped, blood curled. Magic, Sandy thought. If only magic was real. How wonderful would that be? Sandy understood she was naïve, the result of an isolated childhood and her parents’ death when she was ten years old. Not that they had taught the young Sandy about the world she lived in either. They’d kept her under lock and key, never so much as offering a glimpse or advice on the outside world. They were always so cryptic with their explanations, living in an abundant and overgrown mansion as if luxury were a childhood friend. Sure there were plenty of rooms for a child to explore but as time went by those rooms seemed more like a prison than a home.

Years of neglect, isolation and secrets were as torturous as physical suffering. And she was tired of secrets. She wanted to know truth. Truth was like a blanket that keeps you warm in the coldest winter.

“The blood, Sandy,” said Ellen who clenched her fist around those crimson droplets, shaking her hand in front of her face. “All is in the blood.” 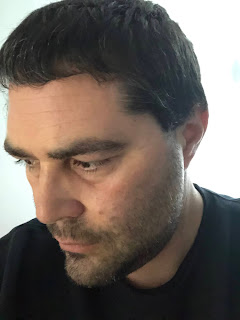 PD Alleva is an alternative fiction author. His novels cross genres, blending mystery, conspiracy, psychology, and action with horror and dystopian science fiction. Alternative fiction is PD's attempt at describing what readers uncover in any one of his books, a new discovery towards mainstream storytelling. He's been writing since childhood, creating and developing stories with brash and impactful concepts that he would describe are metaphors for the shifting energies that exist in the universe. PD exists inside of his own universe, working diligently on The Rose Vol. II and exceptional horror novels. Be prepared for Golem, PD’s upcoming horror thriller.

Good morning, thank you for hosting. Hello constant readers and book lovers, welcome to this weeks tour stop. I'll be stopping in throughout the day to reply to comments and answer any questions you may have so feel free to ask away. Enjoy the tour stop and good luck on the giveaway and have an awesome Tuesday. Thank you for stopping by, PD

I enjoyed the excerpt, sounds like a book that I would enjoy, thanks for sharing it with me!

Thanks for sharing your great  book and for the giveaway too.

Thank you for sharing this book and author details, it sounds like a must read for me.

Alleva is a new author for me. Thank you for sharing.

Thank you Caryl, good to know I'm in good company. Thank you for stopping by, enjoy those alien vampires, PD

You are welcome Bea, thank you for your feedback.

thank you for stopping by Sherry. Good luck on the giveaway

Thank you Victoria, good luck on the giveaway

Thank you for the feedback Rita, good luck on the giveaway!

Thank you for the feedback James. Enjoy the alien vampires.

Thank you for stopping by Stormy Vixen. Good luck on the giveaway.