If you came for Saturday Sample, scroll on down, but why not enjoy this post first? 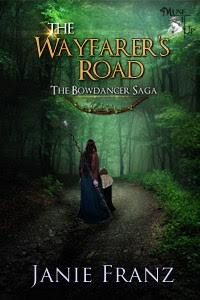 The Bowdancer Saga continues in The Wayfarer’s Road. Healer Jan-nell, now a woman traveling alone with her precocious young daughter on the Wayfarer’s Road, meets a handsome wandering bard. But he is carrying his own secrets along with the priceless chance at hope for her and her child to belong.

Excerpt
She clicked her tongue at him. “Did not your mother teach you manners?”

“Obviously, yours did not,” he answered.

The woman stepped back, freeing the sweating man. “My mother had little to do with my education.”

With the staff no longer the focus of his attention, Razlo’s eyes now were level with those of the curly-headed child that clung tightly to the woman. But those eyes were not the eyes of a fearful waif. They were knowing, aware, and held him in contempt. “Have a care raising that one,” the innkeeper mumbled.

The woman switched her staff to her left hand and caressed the little girl’s dark curls, causing the child to look up. The woman smiled down at her, then raised her green eyes to the innkeeper again. “A blanket for the straw, sir. Mira-nell will need protection from the damp.”

Razlo grunted as he struggled to stand, hauling the tray of pie scraps from the floor. Waddling into the kitchen, he muttered, “Unnatural” and “Bold, brazen whore.”

The woman picked up the cloak she had dropped in her encounter with Razlo and shook it into folds, drawing it again about her shoulders. The child pushed away from her slightly and protested. “You promised a bed this time.”

The woman stroked the child’s serious face. “It could not be helped. These civilized folk are more barbaric than the mountain farmers.”

“I know,” the woman spoke sharply, and then softened her tone. “It could not be helped.”

“You could have made them change.”

The woman laughed. “Now how could I have done that, wee one? Do you expect me to battle the entire countryside? It is their custom. We do not live here. We are only staying the night.”

“You have not only courage, but good sense,” a man’s voice said at her ear. She turned her head to find a wiry man beside her, dressed in a full-sleeved muslin shirt, a green homespun tunic, matching leggings, and knee-length laced suede boots. An elaborately embroidered strap crossed his chest. From it hung a lute; its rich wood glowed like warm honey.

“And you, friend, must be well-loved here to antagonize the citizenry.”

The man’s thin mustache angled upward in twin arcs as he smiled impishly. “Songsmiths are tolerated. I am considered an addled idler.”

The woman laughed again. “We are well met, friend. I am called Jan-nell. Would that I were not so travel-weary, I would trade a verse or two with you. Perhaps tomorrow.”

Cocking his head to one side and causing his brown, wavy hair to cascade over his shoulder, the singer glanced over her petite body. “Perhaps later,” he suggested with a raised eyebrow.

“Perhaps tomorrow,” she said firmly, but with a wry smile. “There is a ban on whores in this hostelry, have you not heard?”

He laughed. “I am known as Khrin.”

Razlo panted up to them with one holey blanket and a lantern. He frowned at Khrin, but said to Jan-nell, “This way, woman.”

Drawing her cloak about Mira-nell once more, she followed the innkeeper out into the rain toward a small shelter in back of the inn. It hardly looked big enough to house a couple of milk cows much less travelers’ horses if the inn was full.

Character Interview—Khrin
Job? I am a wandering bard, though my family would rather I settle down and build a house in my village next to theirs.

Level of schooling or self-taught? The road is my teacher. I learn songs everywhere and meet some of the most interesting people, especially that cloaked little firebrand with her quick-witted child.

Favorite food? I am quite fond of my mother’s bread. But I am beginning to enjoy found food along the Wayfarer’s Road. If only I had the hand to herb fish as this woman I found at the Wild Boar does.

Significant other? Do you mean a wife? Ho-ho. Not I. I am enjoying the wanderer’s life. My mother, though, thinks I have been alone far too long. Tis true many of my younger brothers and sisters are already wed with hearths crowed with young faces. But for me there is no one. Though this sweet child, Mira-nell, whose tongue and mind are far older than her wee bones, could cause me to hang up my traveling boots. And her mother has such alluring green eyes, even though she does not know how to use those beautiful gifts to charm me or any man.

Wealthy, poor, or somewhere in between? I am rich in song and wit but often my purse is light. 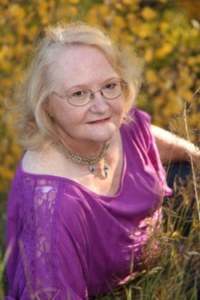 About Janie Franz
Janie Franz comes from a long line of Southern liars and storytellers. She told  other people’s stories as a freelance journalist for many years. With Texas wedding DJ, Bill Cox, she co-wrote The Ultimate Wedding Ceremony Book and The Ultimate Wedding Reception Book, and then self-published a writing manual, Freelance Writing: It’s a Business, Stupid!  She also published an online music publication, was an agent/publicist for a groove/funk band, a radio announcer, and a yoga/relaxation instructor.

Currently, she is writing her tweveth novel and a self-help book, Starting Over: Becoming a Woman of Power.

Thank you for hosting me.