Beyond the Book: Fashion From the Past 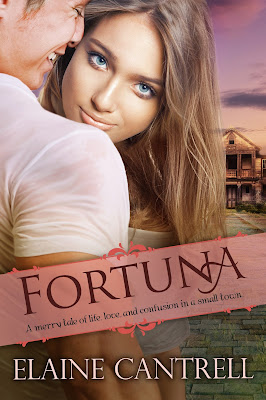 Aimee, my heroine in Fortuna, started an online business selling authentic reproduction costumes. She charges somewhere around $250 and up. Here's a description of the first dress she ever made.

Aimee slowly turned around and inspected herself in the full-length mirror she’d made Rocky buy. After two weeks of almost nonstop work, her nineteenth-century party dress was finished. She had sweated bullets over this dress, but she had learned a lot. If she made another costume, it wouldn’t be half the trouble of this first one. Rocky had learned some things too, but he’d made her swear she’d never tell anybody he’d helped her.

Truly, though, this probably was the second dress she’d made. She messed up the first one so bad she had to go back to the store and buy more fabric.

The bodice was low and pleated with stitched-down pleats. She had darted the lining and closed it with hooks and eyes the way they did in the nineteenth century. The neck and short sleeves were trimmed with the white embroidered edging favored by the clerk who helped her at the fabric store. She had hand-pleated the skirt to the waistband.
“How do you like it?” she asked Rocky who had just entered the bedroom.

Here a few pictures of old-fashioned gowns that I think are really pretty. The first two from the 18th century. 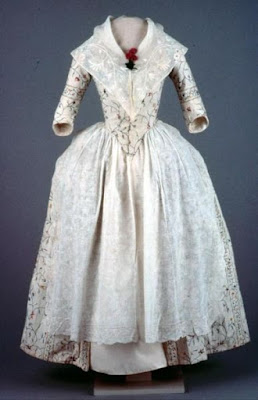 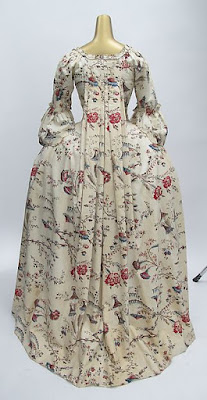 The next two are from the Civil War era. This one is a wedding dress. 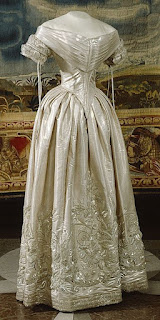 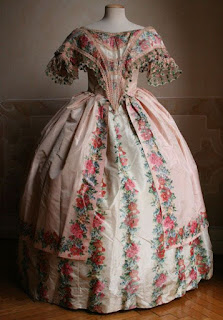