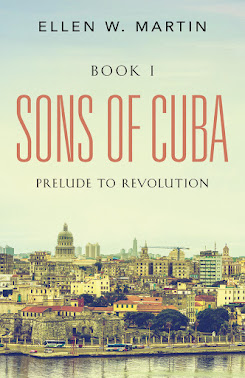 BLURB FOR BOOK I AND BOOK II – SONS OF CUBA

Relentless political turmoil streams through the veins of Cuba like lava coursing down the side of a volcano holding the Cuban people hostage to tyranny since Christopher Columbus discovered the Caribbean Island.  One wonders if the country’s destiny can ever change.

In BOOK I – SONS OF CUBA – PRELUDE TO REVOLUTION Felipe Cardena, the rebel, endures lost love, the exhilaration of victory, demoralizing disappoints, imprisonment, exile, and an assassination attempt.  Nothing will stop Felipe Cardena until he achieves his ultimate goal — free Cuba from tyranny.

In BOOK II – SONS OF CUBA – HOMECOMING after victory is declared by the Cuban rebels, the plot shifts away from the revolution and centers on Tangi Montolio, a fiery redheaded activist who once was one of the rebel leader’s most passionate supporters.  Tangi and her family become a victim and suffers under the hands of Felipe Cardena’s new leadership.  The rebel now turned dictator will discover that his brief interaction with Tangi will lead to the destruction of his legacy. 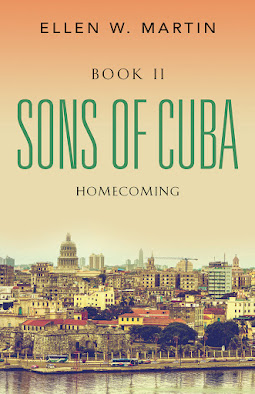 BOOK I – SONS OF CUBA – PRELUDE TO REVOLUTION

“FELIPE...  Felipe Cardena,” the old man whispered, shaking the young recruit.  “Wake up, you must hurry.”

“El Presidente is sending the Cuban Navy to intercept this ship.  He canceled the invasion of Santo Domingo.”

Felipe yawned and rolled over “So what?  Maybe he changed his plans.”

The man dug his fingernails deep into Felipe’s shoulder.  “Yes, there’s been a change in plans.  A revolution may start any day and you’re on the wrong side.”

Felipe rolled over on the hard steel deck of the frigate’s makeshift dormitory, fought the sleepiness lingering in his head.  He grabbed his heavy boots and shoved them on his feet trying not to wake the nearby soldiers.

He looked over at the old man.  “Who the hell are you?” he whispered, fumbling with his laces.

“That’s not important.  What’s important is Salabarrìa’s police shot and killed Emilio Trò.  Fires are burning in the streets of Havana; mobs are overturning cars and buses.  The rumor is that the troops on this ship are heading back to Havana to overthrow the Cuban government instead of liberating Santo Domingo.  No one on this frigate is to be trusted.  That includes you, my young amígo.”

Felipe rolled his sleeping bag, picked up his machine gun and backpack.  He waited a moment for his eyes to focus in the darkness.  Sounds of snoring and the odor of week-old sweat saturated the stale air in the lower deck.

DID I ALWAYS WANT TO BE AN AUTHOR?

No, not really, at least consciously.  However, when I dig into the depths of my memory, I do remember taking a creative writing course in college.  Maybe this was a peek into my future and I didn’t realize it at the time.

When I grew up, there weren’t many doors open for my generation unless you wanted to be a teacher, a nurse, or a secretary (they didn’t call them personal assistants back then).  And, of course, the main objective for a young woman was to get married, have babies, and live happily ever after.  I make this sound so bleak, but it wasn’t – not at all!  All of the above were and are honorable goals and occupations.  My life has truly been blessed for many reasons, and I’m thankful for it every day.

So if I didn’t always want to be an author, when and why did I become one?  Forty-years after I took that college creative writing class, a story swamped the news media for months.  I became both intrigued and confounded by those reports. After the situation was “resolved” (and not the way I hoped it would be), I started doing copious research.  Months, maybe even a year or so later, I found myself in front of my computer writing the first draft of SONS OF CUBA.

TELL US ABOUT THE PUBLICATION OF YOUR FIRST BOOK?

The news frenzy I mentioned in the last question became the catalyst that inspired me to sit down at my computer and begin to write after extensive research.  That story that snagged me and wouldn’t let go occurred in 1999 in the state of Florida.  A small five-year old Cuban boy was found floating several miles off the coast of Florida in a tube.  His mother and several others drowned in their attempt to make the ninety-mile crossing from Cuba to the United States coast.  What was all the brouhaha about?  Since this child’s mother died before reaching American soil, he became a pawn between both the U.S. and Cuban governments flexing their muscles as to who and where the boy belonged.

But this boy’s story was just the carrot that initiated my strong desire to try to understand why so many Cubans risked their lives bailing out of Cuba faster than the sinking boats they arrived in.  I wanted to know more than what I was reading in the newspaper, or told by a water cooler.  I needed to dig deeper into Cuba, their history, their culture, and, of course, Fidel Castro.  Before I knew it I was reading everything I could get my hands on with the word “Cuba”.

After all my research I began to write a story based on actual events leading up to the Cuban Revolution, but used fictional characters that followed the same general path.  I did this in an attempt to put the puzzle together in my own mind as to “why” so many felt the need to leave their beloved country – many dying in the process.  Before I knew it I had written a two book series entitled SONS OF CUBA.

BESIDES YOURSELF, WHO IS YOUR FAVORITE AUTHOR IN THE GENRE YOU WRITE IN?

Actually, I don’t have a favorite author in historical fiction, unless it is Margaret Mitchell – Gone with the Wind, maybe author,James Michener, too.

As mentioned earlier, my intention was never to write a historical fiction, I was just piecing a puzzle together for my own satisfaction.  Before I knew it I was hooked, cleaned, cooked with my interest in Cuba, and was gifted with a fictional two book series for my efforts.

After I completed writing SONS OF CUBA, I realized how much I enjoyed plotting stories, developing characters, and putting everything together into story form.

My true interests lie in the suspense/thriller genre, and most everything I read and now write fall into this category.

WHAT IS THE BEST PART ABOUT BEING AN AUTHOR?  THE WORST?

The best part about being an author is the creativity.  I can’t emphasize enough how much fun it is to create a story with as many twists and turns that will fit into a plot and be plausible.

The worst part about being an author is the laborious task of trying to be published and failing again and again.  You reach a point where you just want to give up and create stories just for the mere satisfaction of creating something for enjoyment – even if it is just for you.

I’ve written a suspense/thriller entitled INTO THE DEVIL’S DEN – SNARED BY THEIR OWN LIES.  This is a tangled tale about a father caught in a twenty-year old lie he told his daughter when she was a child.  Now his greatest fear is losing her trust forever.  Before he can seek forgiveness, he must race against time to save her from a jihadist’s sleeper cell – leaving a trail of murder in his wake.

For more information about my books check out my website http://www.booksbyellen.com  You’ll find excerpts from the series SONS OF CUBA and photos we took while visiting Cuba.

There is also an excerpt from my next book INTO THE DEVIL’S DEN - SNARED BY THEIR OWN LIES.  This suspense/thriller will be released by the end of October 2020.

After a lifetime of personal adventures, travel and escapades (a lot of risky escapades), author Ellen Martin, is living her sunset years bouncing around a tennis court or clicking away on her keyboard.

Outrage at social injustices, the thrill for suspense, and unraveling a good mystery are triggers that motivate Ellen to write memorable stories and colorful characters.

Over 30 years as a military wife, she has resided both in the Orient and in Europe where she became no stranger to social injustice and poverty.  She and her family have lived in the Philippines, Japan, Italy, and the Netherlands — not to mention both U.S. coasts and Kansas in the winter.  She is fascinated by real-life, colorful personalities.

On a more personal note Ellen was a flight attendant for the Charter Airline Saturn in the 1960’s.  Her job was escorting United States troops in and out of Viet Nam.  Her adventures in the war zone continued until she was swept away by her fighter pilot husband.

After retirement the couple’s travels included Germany, Austria, Czech Republic, Poland, Hungry, Spain, Scotland, and Ireland and topped off with a visit to Cuba.

God gifted Ellen with one “perfect” son and three grandchildren.

You wrap all this in a package and Ellen has been rewarded with an endless supply of fodder for her fiction.

In her historical fiction Book-I SONS OF CUBA–PRELUDE TO REVOLUTION she weaves an embellished tale of the most notorious and charismatic Cuban rebel in modern history.  There’s a chance you might find him charming, intriguing and actually root for him in his early endeavors to free his beloved Cuba from tyranny.

However, in Book II - SONS OF CUBA – HOMECOMING, the story takes the reader from the rebel’s exile in Mexico to preparation for the revolution from the Mountains of the Sierra Maestra.  This is where you will meet the fiery redheaded peasant girl, Tangi.  The narrative shifts its focus from the revolution and centers around the fictional character, Tangi, and her family’s struggles, fears and disappointments in the new regime.

How the story in real life ends is no secret.  But, in Book II – SONS OF CUBA – HOMECOMING, the characters and the author may just get the last word.

In 2020 Ellen’s new book INTO THE DEVIL’S DEN turns from historical events to present day reality – Terrorism — terrorism in our own backyard.

Check out her website for excerpts from her books: https://www.booksbyellen.com

Ellen W. Martin will be awarding a $25 Amazon or Barnes and Noble GC to a randomly drawn winner via rafflecopter during the tour.

Thank you so much for hosting my tour today. I truly hope your readers enjoy.

If they would like to see the new Book Trailer for Sons of Cuba on YouTube, here is the link

Happy Friday - thanks for sharing!

I enjoyed the discussion with the author, sounds like great reads, thanks for sharing!

Thank you for sharing, this sounds really good

Thank you Home, Dreams, Life for hosting my tour today. I sincerely appreciate it

Also a big thank you to everyone to stopped by and took a look at my book and interview.

Your book sounds like a great read and thank you for sharing it with us.