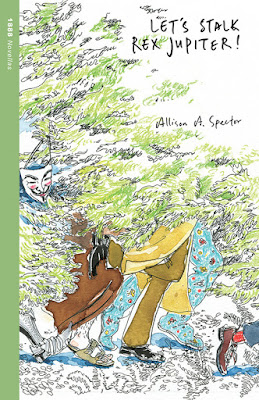 Trouble’s brewing in the Evergreen Jungle. When controversial author Rex Jupiter plans a visit to a Bellingham bookstore, news of his arrival attracts the attention of the mysterious Paladin, who plans on leading a mob of rioting housewives against him. But the Paladin has competition. Sleuth-extraordinaire Marian Krause has her own bone to pick with Jupiter as she scrambles to solve the death of a woman who has stolen her identity. Rex may think he has the situation under control, but when the wrath of the local Druids is incurred, pitchforks and torches may be the least of his concerns.

Marian’s lungs shuddered against the fumes of the organic, locally sourced, native-friendly tobacco as it passed from the long-stemmed cigarette holder through her lips and into her body. It was a dirty, messy habit. And it was hers. The smoke floated in the air, letting forth a wave of guilty pleasure. She carefully measured out her puffs, since theauthorityoneverything.com told her that for every cigarette she smoked she would lose 5.5 minutes of her life.

Thus, she made sure that she only sacrificed 1.375 minutes at a time. She found the pleasure-to-life-lost ratio to be acceptable as everyone knew that all detectives smoked. And they did so in darkened rooms, with shades drawn, and only the light of a low-watt desk-lamp to illuminate the wisp of airborne tobacco trailing off like a faded dream.

Also, it made her feel badass. So, there.

Of course, there were disadvantages to sitting in a darkened room, the greatest of which was that it made her extremely susceptible to her husband’s Tokens of Affection, which usually fell into three categories:

(B) Fan Fiction: of a most Adult variety, written about Marian, and cleverly slipped in between her meticulously organized case files and resumes

(C) Brazen Thievery: which meant that her Second-Most Favorite Fedora would be missing, and she could only retrieve it following an Elaborate Series of Clues

The very thought of his categorical attentions made her want to climb down from her attic office and pay him a Conjugal Visit that instant. She would bring the Special Trench Coat and the magnifying glass and…

She slapped herself on the cheek. Love would have to wait.

The best part of being an author is authoring. Creating, writing, sharing, making—these are my passions.  They soothe my spirit and keep me excited for each new day.  The worst part about being an author is that you still need a day-job in most cases in order to keep the lights on and the bills paid.  Fortunately, I’m pretty happy with my current work/life balance and I still get to write quite a bit for my non-authoring career—so it all works out nicely.


2.Which book of yours is your favorite? Why

I think my ongoing JukePop.com serial The Fringers is my favorite.  It’s a dystopian tale with a heaping helping of snark and side-eye.  It takes place at the Jersey shore during a time where reality stars are indentured servants and privacy no longer exists.  You can check it out on the JukePop website where I’m posting it one chapter at a time.


3.What are your favorite authors in the genre that you write?

There are elements of myself throughout the book, but none hold the monopoly on “Allison-like traits.”  So here’s a super-special inventory just for your blog!

The Paladin:  Irreverence, vague liberal guilt, desire to right wrongs
Marian Krause:  Quirkiness, unconventionality, not caring what others think
Dave Krause: Loyalty, sardonic wit, love of the peculiar
Penelope Perkins: NOTHING
Bearded Virgin:  Geekiness and weird hobbies
Abbie Garcia: Um…affinity for Live-Action Role Playing & lady facial hair issues
Gertrude Phillips:  The way she handles jerks and danger.
Frank Perkins: NOTHING
Jim the Druid:  NOTHING
Rex Jupiter:  Desire to make a mark on the world and to speak one’s mind (although I’m pretty sure I haven’t inspired any angry mobs yet…)

Thanks so much for the interview!  I greatly appreciate your time and support!

You're welcome, Allison. I enjoyed your interview, especially #4. 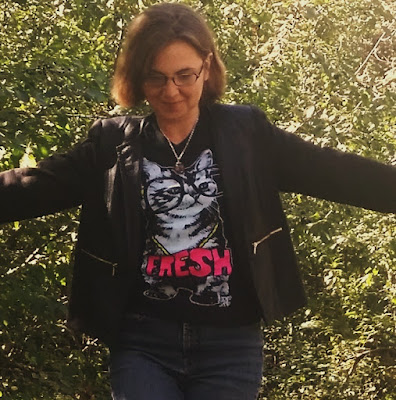 Allison Spector was born and raised in the hedonistic playground of the Jersey Shore, but finds herself oddly allergic to spray tan.  She is a proud graduate of Goucher College, and started her environmentally-focused career in Washington DC in 2005.  She moved to the Pacific Northwest in 2008, and fell in love with its beauty and people.  Allison is currently on a Midwestern Adventure and is determined to live as much life as possible—to accomplish her dreams one at a time—and to nurture her loving family, and blaze a trail of wit, whimsy, and eccentricity wherever she goes.

Allison Spector will be awarding a signed copy of book with original plot outline notes (loose sheets of paper) inside and additional notes at end or in margins of story (US/Canada only) to a randomly drawn winner via rafflecopter during the tour. Use the link below to enter.

How many books do you have checked out from the library?