Son of the Moon 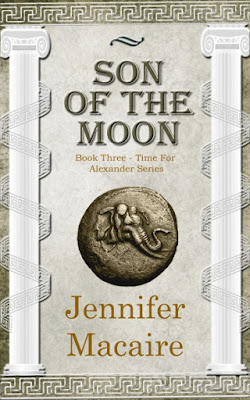 SON OF THE MOON
by Jennifer Macaire

In Nysa, Alexander the Great and time traveling journalist Ashley find their abducted son Paul being worshiped as ""the son of the moon"". Knowing she can’t change history and that Alexander’s kingdom will be torn apart when he dies, Ashley must make the terrible decision to leave her firstborn son in the sacred valley.

Alexander presses on to India, where he and Ashley are welcomed with feasts - and treachery.  They struggle through monsoons, face the might of Porus’s army, and outwit deadly Brahmin rebels. Facing the reality of Alexander’s looming death, Ashley considers the unthinkable - How to save him, and the consequences of cheating the Fates. Book III in the Time for Alexander series"

The battle that day was over by mid-morning. Alexander lost twelve men. The enemy lost half their army and sued for peace before noon.

Alexander was carried into the infirmary where I was helping Usse. His ankle had been shattered by a lance.

“Are you all right?” I asked, rushing to his side.

He stared at me, sweat pouring off his face, and his eyes two wells of pain.

“Would I come here if I was all right?” he gasped.

I sat down next to him and held his hand while Usse took off his sandal and examined the wound. When he probed, my own hand was nearly broken in Alexander’s grip, and I yelped.

“Sorry,” muttered the slender Egyptian doctor, dousing the ankle with hot water mixed with different herbs. He cleansed it and put a splint around it. There wasn’t much else he could do. Now we just had to pray it didn’t get infected.

We stayed for three days while we organized the peace talks with both tribes. Then Alexander decided to pull out and head straight to Nysa. An ambassador for the Assacenian king told us that the child of the moon was being worshipped in Nysa.

The child of the moon was Paul, my baby, now nearly five years old. I hadn’t seen him since he was ten days old.

Alexander left two divisions behind with his general Coenus while we took the rest of the army. We would all join up at the Indus River.

Jennifer Macaire lives in France with her husband, three children, & various dogs & horses. She loves cooking, eating French chocolate, growing herbs and flowering plants on her balcony, and playing golf. She grew up in upstate New York, Samoa, and the Virgin Islands. She graduated from St. Peter and Paul high school in St. Thomas and moved to NYC where she modeled for five years for Elite. She went to France and met her husband at the polo club. All that is true. But she mostly likes to make up stories.

THE AUTHOR WILL BE GIVING AWAY A  $10 Amazon/BN GC

Thank you for featuring me on your blog! I will stop by this evening after work to answer any questions!!