Donna Parker and The Cameron Connection 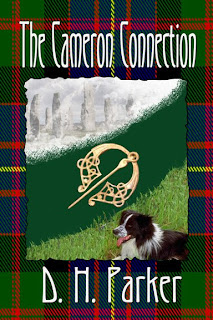 Welcome, Donna. Thanks for sharing with us.

An average, everyday kid in the Missouri Ozarks develops a new respect for family connections when Scottish history and myth meet and clash with his real world.

Fifteen-year-old Robert Bruce Cameron's summer "vacation" isn't. His Scots-born history teacher, a.k.a. his dad's best friend, Macrath, is working him to death getting ready for the town's first "Scottish Gathering and Highland Games". Robert B. is sick of it and sick of his family's obsession with its ancient Scottish roots. To top it off, he's worried about his sister, who has taken up with creepy Val Sheridan and gets more depressed and distant every day. Then a fierce, kilt-clad stranger materializes in the Cameron kitchen wall. Ghost? Time traveler? Or worse?

The guy in the wall, the invisible girl, the Stone of Choosing.... Something weird and dangerous is going on in Sheehan, Missouri. Robert B. and his best friend, Clem (short for Clementina), must help stop it before the whole Cameron Clan is zapped out of existence.

EXERPT:
Andrew’s eyes sparked fire and he gave Karl a glancing look. “Ah,” he said, “but then I am not without a few tricks of my own. Well, they are Oran’s tricks, but he has given me the use of them.”

He pulled from under the neck of his t-shirt a thin leather-like thong. At the end of it hung a small cloth pouch. Andrew opened it and dumped onto his palm a rough, gray stone, unshaped, unpolished.

It lay flat in his hand looking dead and uninteresting. Always eager to discover something even remotely edible, Dougal opened his eyes and moved his nose toward the stone.
And suddenly he was on his feet, stiff and silent and all the hair along the ridge of his back standing straight up. He did something then that I’ve never seen him do before or since. He laid back his ears, stretched his muzzle skyward and let out a blood-congealing, bone-dissolving wolf howl.

Dougal, who had caused the wiggly gelatin feeling in my knees with that unearthly howl of his, recovered first. He shook himself, turned around three times, lay down with his nose on his paw and closed his eyes. Like nothing at all had happened.

I looked around at the others. Andrew, a gentle smile on his mouth, was watching Dougal. Rose had a hand over her mouth as if to keep herself from howling. Clem’s face was white, but she didn’t look scared, just startled.

Only Karl was not watching the dog. His eyes were on that gray sliver of rock that Andrew was holding. What was he seeing in it? His face registered fear and anticipation, and it scared me silly.

What did we know about Karl, anyway? Clem had never seen him before her family had gone to fetch him. Maybe he wasn’t really her cousin at all. Maybe he was one of the shape-changers.
His gaze moved up from the rock to Andrew’s face and Andrew looked back at him, still smiling that gentle, sweet smile. Slowly Andrew extended the stone toward Karl. “It is the Stone of Choosing,” he said softly. “Do you know it, young Charlie?”

Karl stood slowly and backed away one step. Then, as if he couldn’t help himself, his own hand reached out toward the stone. He began to move forward.

That piece of gray, dead rock in Andrew’s hand started to change. I thought it was a trick of the light, at first. But the movement wasn’t a light trick. It was in the stone itself. Solid as a rock. I’d heard that all my life. Well, this one wasn’t solid.

As Karl approached it, it began to blur. With each unwilling step closer he came, the rock changed more. It began to glow, first a delicate shade of lavender, then a colder and colder blue.

Karl’s hand was within six inches of the rock when it happened. Like a high-powered laser beam, the blue glow focused on his hand, changed to brilliant green and discharged. For half a second, Karl himself glowed blue-green. Then it stopped. Karl’s arm dropped limply to his side.

He looked totally unhurt, only slightly dazed. Slowly Andrew replaced the stone in its pouch and hung it once more around his neck. My heart rate began to slow down a little.
Rose glared at Andrew. “What did you do to him?”

“It was not of my doing at all. It was himself who drew the power, as I suspected he would.” Andrew sounded almost as shaky as Karl looked.

Clem glanced at me and licked her lips. “What happened?”

I shrugged. If Karl or Andrew couldn’t explain, we would all be in the dark.

Karl made an attempt. “It was as if... as if I were being tested,” he told us. “And then it recognized me, almost as if it were a living thing. I don’t understand it at all. I felt as if I’d been given a welcome, as if I had come home. The light was not harming me. The light was... registering me, accepting me, drawing me in. I felt as if I became part of it for a moment, and that in some way, I am still a part of it and it of me. Yet, if I had not been who I am, if I had been the evil instead of the good, or if I had been threatening Andrew--”

Karl nodded. “It is an awesome thing you hold, Andrew Cameron.”

“It is that. A Stone of Choosing from the Heart of Power at Callanish, Oran was calling it.”
“Will it destroy? Can it truly kill as I saw?”

“It would depend on the strength that met it. In danger, it will counter strength with strength so that the holder will not be harmed. If necessary, it will kill. That is what Oran was telling me.”

available in e-book formats (including Kindle-compatible Mobipocket) and trade paperback from the publisher:
http://wingsepress.com/Bookstore/The%20Cameron%20Connection.htm

Donna's website: http://donnaparker.w4aw.org
Posted by Elaine Cantrell at 6:49 AM