Linda Banche and Lady Of The Stars 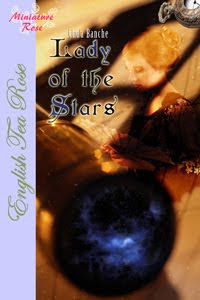 It's a rainy Monday morning in SC, but maybe this nice excerpt from Linda Banche will brighten up your day. Enjoy.

A legend spanning time and the man and woman caught in it.
Caroline knows something is wrong the instant she steps from her holiday cottage into that unusual gazebo with two doors. But when a man she knows she will never see again appears outside the gazebo, she flings caution aside and plunges through the back door, crashing into the man--and 1817.
A voyage through time? Impossible. Richard refuses to believe the strange woman's outlandish tale. Still, the lady is lost and alone, and he helps the stranded wayfarer.
But as attraction flares between these two lonely people, Richard's family legend grinds to its ultimate fulfillment--will it bring them together, or tear them apart forever?

Excerpt:
Caroline followed him into the room she knew was the kitchen and he stepped up to the banked fire.

Fire? Where were the stove and refrigerator? And all the chrome and stainless steel of the ultramodern kitchen she had seen only this morning? This kitchen contained a scarred wood trestle table with several chairs pushed under it. Pots and pans hung on wall racks and reflected the dim firelight. A cupboard stood against the far wall, next to a sink with a pump. A pump?

With shaking hands, she set the lantern on the table and pulled out one of the chairs. She was in trouble, very deep trouble.

As she sank into the chair, she turned her stunned attention to her host.

Unaware of her gaze, he busied himself at the fireplace. His back to her, he placed the candelabrum on the mantle above the hearth, then drew the fire screen to the side of the grate. Dropping onto his haunches, he pulled several logs from the nearby basket, then arranged the wood in a neat pile on the smoldering embers. Almost at once, the flames blazed to full roaring life.

Silhouetted against the light, he straightened, replaced the screen, then removed his hat and tossed it on the table.

Her jaw dropped. Good heavens, the aggravating man was gorgeous. Tall and slim, his broad shoulders tapered to narrow hips and long legs. But where had he found that outlandish outfit? He wore a top hat, out here in the middle of nowhere. His shirt collar was turned up and he wore a huge white tie. And his waist-length, double-breasted jacket had tails, like the one an orchestra conductor wore. Muddy black boots with the tops turned down came up to his knees. Skintight trousers, or were those breeches--of all things?--emphasized every well-formed muscle.

What was she thinking? She hadn't felt anything for any man in a long time. Not since . . .

He turned, and for the first time that night she fully took in his face. She gasped. Had she seen a ghost through the gazebo's back door? "Richard?"

Puzzlement spread over those chiseled features she now saw only in her memories. "How do you know my name?"
Posted by Elaine Cantrell at 6:33 AM

Hi Elaine, thanks for having me over.

Thanks for coming. Your story sounds very ingriguing.