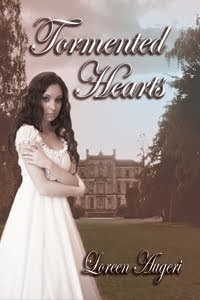 You'll want to put May 28 on your calendar, folks. That's the day Loreen Augeri's Tormented Hearts will be released, and I don't think you'll want to miss it. Here's her excerpt.

As she stalked past him, his fingers grazed her shoulder to halt her. A sizzling warmth pierced her skin and swirled throughout her body. Catherine restrained the gasp that fought to break from her lips. She’d prayed the sensations she experienced last night resulted from the lingering effects of the dream and lack of sleep, but they seared her again.

Brett jerked his hand back as if she scalded him, and it hovered in the air above her shoulder. Unsure, she turned to him. The pulse in his temple beat at a frantic rate, and the muscles in his jaw clenched. It affected him, too. She delved deep into his eyes, and the turmoil that appeared to tear him in different directions caught and captured her.

She yearned for the heat of his fingers to engulf her again, to feel his body pressed against hers like last night, the whisper of his breath on her cheek, the exquisite thrill of not being alone. Her gaze fell to his appealing, moist lips. Not thin and dry like Lord Wallingford’s.

Brett leaned toward her and then withdrew. He swallowed, and his Adam’s apple bobbed before he cleared his throat. “You can stay here with him.”

She blinked as the strange immediacy to be embraced faded away. What had she been thinking? She never wanted another man to touch her. Ever. Especially not one of his station.

http:/www.loreenaugeri.com
Posted by Elaine Cantrell at 6:44 AM