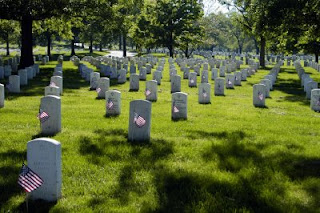 We know Memorial Day as a day off work, a time to grill our favorite foods, get together with the family, or maybe even take a vacation, but that isn’t the way the way things were in the beginning. Memorial Day, which was previously called Decoration Day, began as a way to honor those who died in the defense of their country during the Civil War.

Many different places take credit for establishing Memorial Day, but I think maybe I’ll give credit to Southern ladies who were decorating the graves of loved ones before the Civil War even ended. In 1867 a hymn titled Kneel Where Our Loves Are Sleeping by Nella L. Sweet carried the dedication “to The Ladies of the South who are Decorating the Graves of the Confederate Dead.” (Source: Duke University’s Historic American Sheet Music, 1850-1920.)

Probably a great many cities had their version of Decoration Day, and over time there were so many that the movement culminated in 1868 when General John Logan officially proclaimed Memorial Day as a time of reconciliation, a time of coming together to honor those who gave their all. Johnson was the commander of the Grand Army of the Republic In his General Order Number 11 he ordered that flowers be placed on the graves of the Union and confederate soldiers at Arlington National Cemetery.

New York was the first state to recognize the holiday, and by 1890 it was recognized by all the Northern States. The South didn’t come on board until after World War I when the holiday changed from honoring just those who died in the Civil War to honoring those who died fighting in any war.
Since 1971 Memorial Day is celebrated in every state on the last Monday in May.

If you have a deceased veteran in your life, why not take a moment to place a flag or a flower on his or her grave. It was thanks to their sacrifice and the sacrifice of others like them that we enjoy the freedoms and personal liberties denied to many in the world.
Posted by Elaine Cantrell at 6:21 PM