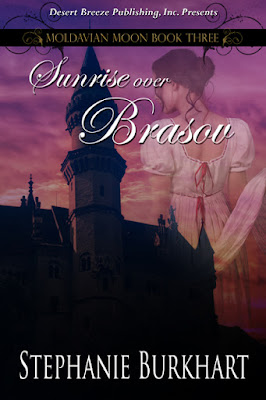 Sunrise Over Brasov
by Stephanie Burkhart

Rosa Getzi lives a life of intrigue at Poiana Brasov with Clement, a werewolf, and Cassandra, the witch. Her past doesn't matter to her – until she discovers what it holds.

Prince Michael Sigmaringen joins his sister-in-law, Caroline, and the vampire prince, Darius, in a daring rescue, igniting Rosa's desire to find her family. However, all is not as it appears. Rickard, Rosa's friend, escapes with her. Clement will go to any lengths to get Rosa and Rickard back.

At Darius' fortress, Michael soon discovers Rickard is a new breed of werewolf – one who can control the change, and Clement hopes to exploit Rickard's abilities.

Michael's courage, strengths, and convictions will be tested like never before. Can Michael and Rosa find true happiness and the rid the lupine haunting of the Sigmaringens once and for all?

The door flung open and a man stepped into her room. Who was he? The vaguely familiar scent of sandalwood and pine filled her senses. Her heartbeat spiked, but she held her ground and set her chin, determined not to show him an ounce of fear.

There was no denying his masculinity. He was tall and his massive shoulders filled out the cloak he wore. Shadows enveloped most of his features, but she could make out his penetrating amber-hazel eyes through the darkness. A soft gasp escaped her.

He raised his hand and lowered his hood. An inherent strength filled his profile. Confidence. Concern. Relief.

Rosa's breath jammed in her throat. He looked familiar. He smelled familiar.

A frown set against his rugged features. "I don't have time to argue -- now put on a warm
dress and cloak."

"No." She was not going anywhere with him despite the relief in his voice.

He sighed and shut the door. Moving with fluid grace, he crossed the room, jerked the
door to her closet open and threw the items he wanted her to wear on her bed. "Get. Dressed."
"No." She was determined not to budge, despite the danger outside.

"Why would you want to stay? Clement kidnapped you."

Disconcerted, she pointedly glanced away from his hard stare. What did he mean by kidnapped? Clement didn't keep her behind bars and feed her only bread and water. Rosa could even go into Brasov to shop as long as Lucien or one of the bodyguards went with her.

"I'm going to take you back to your mother." 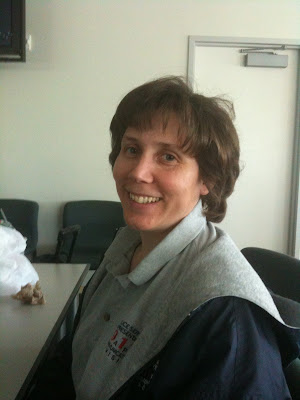 Author Bio: Stephanie Burkhart is a 911 dispatcher for LAPD.  She was born and raised in Manchester, New Hampshire.  After serving 11 years in the US Army she currently calls Castaic, California her home. Stephanie was married in Denmark in 1991 and has two young sons. She adores chocolate, is addicted to coffee and enjoys early morning walks.  She's also an assistant den leader for her son's Cub Scout den and is a Boy Scout mom. She writes paranormal, contemporary, and steampunk romance and has two children's books published with 4RV Publishing.

Stephanie will be awarding a $10 Amazon or B/N GC to a randomly drawn winner via rafflecopter during the tour. Use the link below to enter.

Thank you so much for having me here today. Sunrise Over Brasov takes place in winter, so it's great read for this time of the year.

Steph Burkhart
Romance Under the Moonlight