This post is part of a virtual book tour organized by Goddess Fish Promotions. Elizabeth Cooke will be awarding a $25 Amazon or Barnes and Noble GC to a randomly drawn winner via rafflecopter during the tour. Click on the tour banner to see the other stops on the tour. 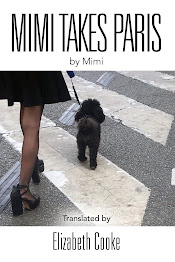 It is the start of the adventures of a small black poodle, escapee from a cruel puppy mill, who is rescued by Nicole Marcel, a pretty girl singer in the City of Paris. The two become inseparable.

The little dog has an animal intelligence and a tremendous sense of smell, and proceeds to solve a murder, and other crimes by nasal prowess. Mimi gains celebrity status, as does her PERSON, Nicole.

In book two, titled “Mimi’s Paris Dilemma,” Mimi’s reputation, (and that of Nicole’s), is sullied by an unfair assessment by the public. The little dog slowly regains status by solving other crimes.

Mimi was fortunate enough to live in Paris, and she knew it. She, and her ‘person’ resided in a petite hotel on the Left Bank. That ‘person’ was young and pretty and would leash Mimi for walks.

In winter, Mimi wore a pink wool coat with a tiny, white handkerchief peeking out from a pocket on the back. It was so handsome against her jet -black toy-poodle hair. Of course, in warm weather, she only sported the leash.

How proud was Mimi to parade along the rues and boulevards. All of 12 inches long and perhaps 10 inches high, she walked with such elan, that people noticed her. She liked that. But most of all, Mimi reveled in the fact that she had been lucky enough to be endowed with a moist, black muzzle with two intense nostrils that provided her with a world of sensuality.

The scent of companion dogs with messages left behind, greeted her at every corner. The odor of soupe a l’oignon or boeuf, simmering in wine, emerged from the bistros as the two passed by, one two legged, the other on four. Oh, and to pass a fromagerie, was a special delight. The smell of the pungent cheeses from across the country within the little store could not be contained, and all of France was laid before Mimi’s hungry little nose.

Occasionally, Mimi was lucky enough to find a morsel of crepe au sucre on the rue Cler, inadvertently dropped by a hungry tourist who had been munching while he walked. Ah, life was good. What a lucky dog am I, was her constant thought.

Mimi knew she was smart, and she knew her sense of smell was extraordinary, even for a dog. She could define with her nose every herbal addition to a stew of veal with sage, or rosemary in a gigot d’agneau. Oh, the herbal names meant nothing, but the specific tingle in her nostrils made everything so clear, distinct and utterly delicious.

But not this time. This was a dark odor. It was the smell of blood.

About the Author: The daughter of the Dean of Medicine at Columbia University, Elizabeth Cooke was raised in Manhattan, graduating from The Brearley School, and Vassar College, with a major in Drama, and minor in Art. As a young woman, she worked in theater and as a casting consultant, briefly served on the board of MoMA, before moving to Paris for three years, after her marriage ended. There, she immersed herself in the museums, studied at the Sorbonne, cooked at The Cordon Bleu, and traveled all over Europe. Until recently, Elizabeth Cooke resided on the East End of Long Island. For 10 years, she was the Chairman of The Bide-A-Wee Home, a prestigious animal shelter complex in New York City and Long Island. She also served on the Executive Committee of the Westhampton Free Library for 30 years.

ParisIn “Eye of the Beholder,” completed after the memoir, Elizabeth Cooke writes in rather irreverent terms, of the lives of six artists and the most compelling muse in each of their lives: next came, “A Shadow Romance,” an odyssey of an unfulfilled love affair between a mature New York City couple: then, the four “Hotel” books. She has just completed “How To Game People Without Even Trying,” the true story (fictionalized) of the murder of her second husband in his Paris apartment. A fifth ‘hotel’ book, titled “Rendezvous at a Small Hotel” has just been released. The sixth hotel book, “Intrigue at a Small Hotel” has received top honors from The Paris Book Festival for 2016. The seventh and final in the hotel series, “The Hotel Marcel Dining Club” is currently available.

For her, there is great joy in having the gift of expression that writing provides, and this is reflected in her rather prolific output.