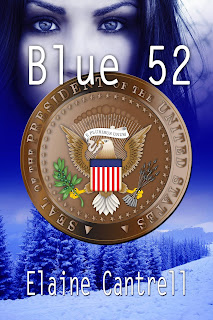 Welcome to Saturday Sample. We've finished Chapter 1 in Blue 52, but I think we'll do a little more. To recap, in 2018, President Richard Lovinggood was murdered by his wife who then took her own life. They left one son, Hank, who's been raised by his grandfather Senator Henry Lovinggood. The president and his wife are buried in California, and their bodies have to be moved to make way for a futuristic train. Hank has decided to take a look at them once they're disinterred. In Chapter 2 we meet my heroine Kathryn Sinclair.

Chapter 2
Kathryn Sinclair rubbed her eyes and fumbled in her purse for a bottle of eye drops. She had been staring at her computer screen for hours, which had caused her eyes to burn something fierce. Her head had started to hurt too, so she grabbed a pill as she rummaged around in her purse.

Thank God for Mycelfin. Prior to the drug’s release, millions of people, including herself, had suffered from migraine headaches, but one Mycelfin and the migraine was history.

She glanced at her watch. Uh oh. I worked through lunch again. Well, why not call Uncle Ira? He never ate until after one anyway, so if he wasn’t busy, she’d grab a pizza and join him for a late lunch. As she had expected, he welcomed the chance to see her.

Thirty minutes later, she arrived at the Sinclair Mortuary. Uncle Ira had started his business in an old, converted house, but you’d never guess it to look at Sinclair Mortuary now. The current facility looked tasteful, elegant, and decidedly upscale. Uncle Ira did a good job for his customers. Many of the local families had taken comfort from his gentle, empathetic manner.

The mortuary had reserved the parking spaces closest to the door for guests. She usually parked there, but today black sedans bearing government license plates filled all the spaces. Curious.

Posted by Elaine Cantrell at 2:36 PM

Some people stir up more interest in themselves after their dead.
Well done.