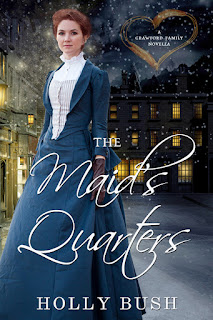 THE MAID'S QUARTERS
by Holly Bush

1893 . . . Alice Porterman is released from her duties as a maid and travels home to help her mother care for her sickly brother. But her mother and brother are not in their family home when Alice arrives and she learns the landlord, Albert Donahue, has evicted them into the harsh Boston winter. Alice goes in search of him and is surprised at what she finds.

Albert Donahue, an up-and-coming member of Boston’s elite, made his fortune through hard work and shrewd business deals. But his dreams of a family to share it with have not come true, perhaps until an impertinent young woman enters his home and won’t leave until she speaks to him.

Alice Porterman looked at Mrs. McKinnell. “What do you mean Ma and Jimmy aren’t living here anymore? It is our house!”

“They’re living in two rooms at the back of the church, Alice. I would have taken them in here, but I have no room, none at all,” Alice’s mother’s closest neighbor said to her. “You better get them, girl. Jimmy wasn’t doing well the last time I stopped by. Your mam can hardly leave him to get victuals or go to work. I’ve been shopping for her when I can.”

“Thank you, Mrs. McKinnell. I’ll go right away.” Alice turned and looked at the narrow two-story home where she’d grown up. “I’ll just put my bags in the house,” she said, and started down the walk that separated the Porterman and McKinnell homes as she had just arrived from the train station coming from Washington.

“Nay, you can’t, girl. They’ve changed the locks. Your mam couldn’t even get back in to get your brother’s medicine. Leave your cases on my porch. I’ll have one of the boys carry them in and we’ll keep them here until you’re settled somewhere.”

“Thank you, Mrs. McKinnell,” Alice said, red-faced. “I will get them as soon as I get this straightened out.”

“Don’t worry, Alice. Just get your mother and brother back home where they belong.”

Alice nodded and kissed the plump, red-headed woman’s cheek. “Thank the Lord you were here to help Ma.”

“It’s nothing. Neighbors do for neighbors. Your mam would do the same for me, she would. So, your mother had Jimmy read me the letter she got from you that those rich nobs are paying you without you even working for them. La-de-dah! And look at them skirts of yours! That is fine wool, is it not, with them lacy petticoats sticking out? And a pretty little hat to boot!” 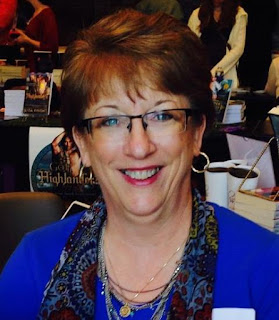 Holly Bush writes historical romance set on the American Prairie, in Victorian England, and recently released her first Women’s Fiction title. Her books are described as emotional, with heartfelt, sexy romance. She makes her home with her husband in Lancaster County, Pennsylvania.  Connect with Holly at www.hollybushbooks.com and on Twitter @hollybushbooks and on Facebook at Holly Bush.

Holly will award a $20 Amazon/BN gift card to a randomly drawn commenter via Rafflecopter. Use the link below to enter. Her tour schedule can be found at

Thanks for having me on your blog, Elaine!