Beyond the Book: Tea Parties 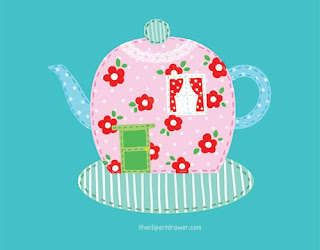 Tea first arrived in England somewhere between 1652 and 1654. The price of tea was high, but people loved it, and it soon became so popular it was seen as the unofficial national drink of England.

The tradition of afternoon tea was first introduced by Anna the Duchess of Bedford in the early 19th century. At that time, breakfast was served at nine or ten in the morning and dinner around three or four. Some people had a very light lunch, but two meals a day was the norm. By the time Anna came along, the dinner hour had gradually moved from three or four in the afternoon to seven or eight at night, so the duchess found she needed a little snack around four in the afternoon.

She had some tea and other refreshments sent to her room every day, a ritual she enjoyed so much that she invited her friends to join her, and the idea of the afternoon tea was born. Don’t be confused, though. There’s a difference between afternoon tea and high tea. Afternoon tea was a nice little snack consisting of bread and butter, cakes, cookies, English trifle, dainty tea sandwiches, and of course tea. Scones with Devonshire cream and preserves were popular too. High tea was eaten between five and six and was likely to be the main evening meal. Coffee and cocoa were also served at high tea although tea was still the most important drink. Earl Grey and Darjeeling were popular choices.

Earl Grey is a blend of Chinese and Indian teas and is scented with oil of Bergamont. Darjeeling is grown near the foothills of the Himalayas. It’s expensive and is often found in blends.

Good conversation became an important part of the tea ritual. Nothing unpleasant was ever discussed because everyone was supposed to relax and enjoy herself. The lady of the house would always sit at the head of the table and pour the tea. They used nice tablecloths and good china but seldom used flowers because their scent might compete with the scent of the food.

In the modern world tea parties are still popular. If you’d like to give a tea, here are a few suggestions.

1. Don’t be afraid to mix and match china if you don’t have a full set. It looks beautiful and is totally acceptable. Flea markets and thrift stores are good places to pick up china.

2. Use your nicest table linens. Layering makes a pretty table, maybe with a lace cloth on top.

3. Use your best silver and crystal. If you don’t have the real stuff, nice cut glass makes a good substitute for crystal, and today’s stainless flatware comes in many pretty patterns. You can also find plastic trays that look like cut glass. It looks nice to place a doily on the serving pieces before you put the food on them.

4. You can use edible flowers such as nasturtiums as garnishes.

5. A centerpiece is acceptable in the modern world, but not necessary as the tea pot, creamer, and sugar bowl will look beautiful in the place of honor. Lumps of sugar is preferred, but if you use them be sure to have a small pair of tongs for the guests to serve themselves.

7. It’s a neat touch to send elegant invitations to your guests.

8. Soft background music and candles create a nice ambiance, but the music shouldn’t be very loud.

9. In pretty weather it’s lovely to dine outside.

10. For each guest be sure you have a cup and saucer and a teaspoon, a dessert plate with a butter knife, and a fork and knife.


What should you serve? Sandwiches and scones are a must, but after that just about anything goes. It depends on your personal preferences. Here’s a couple of my favorite recipes.

1. Chop the dates fine. In a small bowl combine the dates and cream cheese. Mix well until combined.

3. Trim off the crusts. Cut each sandwich into 3 fingers. (make 2 parallel cuts to form 3 sandwiches.) Place sandwiches onto a serving platter. Garnish each sandwich was a small sprig of mind. The tea sandwiches may be made up to 2 hours ahead, if they are covered tightly and refrigerated. (Recipe from Tea Time by Nancy Akmon.)

Mix together and set aside.


Crumble the baked crust and layer the ingredients in a trifle bowl.