Is Elias strong enough to save himself and halt the evil that is spreading across the land? 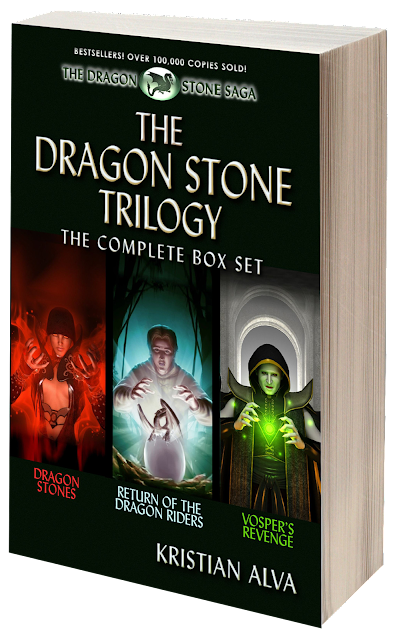 Sequestered deep in the capital, the tyrannical Emperor Vosper weaves a plan to destroy all the dragons. He succeeds in driving them to the very brink of extinction. Only a handful of dragons and riders remain; living in exile in the desert. When young Elias Dorgumir finds a carved dragon stone in the forest, it brings empire soldiers to his doorstep, and puts Elias on the run with a bounty on his head.

With some help from his friends, Elias must escape the emperor's wrath and try to make it to the safety of the dwarf caverns. Elias holds the key to the salvation of the dragon race. Is Elias strong enough to save himself and halt the evil that is spreading across the land?

The evil emperor Vosper gathers his troops in the east, poised to conquer the entire continent. His target is the rebel city of Parthos, a constant thorn in his side, and the last sanctuary of the Dragon Riders.

Besieged from all sides, the remaining Dragon Riders come out of hiding. Forced to fight for their lives, they leave the safety of the desert, traveling across the land to gather intelligence and shore up forgotten alliances.At the center of it all is Elias Dorgumir, the key to an ancient prophesy, and Vosper will do anything to get his hands on him. Is it too late for the Dragon Riders to save Elias and stop Vosper from destroying the only refuge they have left?

As the races of Durn stand on the brink of war, the power-hungry emperor plans his conquest of the entire continent.

The dragon riders are fragmented. They have been scattered across the land; weakened by the discovery of a traitor in their own ranks.

Are the riders strong enough to defeat Vosper before he destroys them all?

This author interview was conducted by Jennifer Teeter-Moore from the book reviewer blog, Just Books for Belongings. The Dragon Stone Trilogy will be free on Amazon at the end of August!

1.     Elias is such an interesting character. He is a healer and has a gentle personality. These are traditionally considered to be very feminine traits. How did you decide to make a character like Elias?

Kristian: It’s funny that you should ask that. Originally, I wanted Elias to be a female character. I changed the character to male on the advice of several editors. I’m glad that I did, because I really like Elias’ personality, and I intend to keep using him throughout the series.

2.     The dragons in the Dragon Stone Trilogy are not just animals that are used by the humans, they are their own race with a history and a culture. The dragons even have a sense of humor! Why are the dragons equal, and, at times superior, to the humans?

Kristian: In some fantasy novels, dragons are portrayed more like dogs or other pets. I didn’t want that—I wanted dragons to be intelligent, with a complex history and culture. I felt that it made the series more interesting.

3.     Elias is the main character, but this trilogy has multiple important characters. Sela and Tallin are important to the plot development and are very different characters compared to Elias. I love that a strong female character is one of the dragon riders, and one of the best. And the bond between Tallin and his dragon, Duskeye, is really beautiful. Why did you decide to have multiple main characters rather than just focusing on Elias?

Kristian: I always intended for Dragon Stones to become a chapterbook series. When I was a young girl, I read the Sweet Valley High series by Francine Pascal, and I enjoyed it a great deal. I wanted to create something similar, but in the fantasy genre. That’s my goal.

4.     I found The Dragon Stone Trilogy interesting because it was not just a fantasy novel with action and mythological creatures, but also a coming-of-age story for Elias. Although Elias does begin to embody some of the traits of his mentors, he still stays true to himself and continues on his own path in the conclusion. Some readers were upset by the ending, do you stand by it?

Kristian: The most common complaint that I received about the ending was that the books seemed “unfinished.” Fans wanted a bigger fight, or a more satisfying conclusion. They wanted to cauterize the ending, somehow. But I always intended the series to continue, so the ending wasn’t as cut-and-dried as some fans wanted. That’s okay, I understand that I can’t please everyone. Elias still has a lot of growing to do, and he will be featured prominently in the next trilogy. It’s not over! That knowledge seems to soothe a lot of my fans’ worries.

Kristian Alva was born into a family of writers and teachers. She worked as a staff writer and a ghostwriter before publishing her own manuscripts. She currently lives in the United States with her family. When she's not writing, she enjoys reading all genres, especially epic fantasy.

Posted by Elaine Cantrell at 3:45 AM