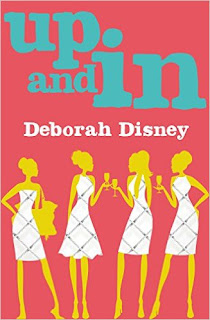 Up and In
by Deborah Disney

Distinctly middle-class parents, Maria and Joe have committed every bit of available income to giving their daughters Kate and Sarah the best education possible, which to them means attending the most exclusive girls school in the state. But when Kate befriends the spoilt and moody Mirabella, Maria finds herself thrust into a high society of champagne-swilling mother-istas she hasn't budgeted for. Saturday morning netball is no longer a fun mother-daughter outing, but a minefield of social politics.

While the increasingly neurotic Maria struggles to negotiate the school mum hierarchy, Joe quietly battles a midlife crisis and Kate attempts to grow up as gracefully as possible (without having her life ruined by embarrassing parents).

For every woman who has ever felt she may be wearing the wrong shoes, this is a book that will remind you - you're not alone.

Fans of Liane Moriarty and Fiona Higgins are sure to enjoy this debut offering from new Australian author, Deborah Disney.

There it was again. That damned full stop. How does so much passive aggression fit itself into such a tiny punctuation mark?

‘Fine with me full stop no x, no way am I ever going to let you think you are in any way deserving of the lathered-up, flattery-filled, signed-off-with-a-kiss kind of email I always send to everyone else on this email list.’

And there you have it. That is what she was able to say to me with one little full stop.

Of course, if any of the obsessively-stroking-and-simultaneously-self-aggrandising netball mums on this email list ever decided just to hit ‘Reply’ instead of ‘Reply all’ to the coach’s weekly email, I probably wouldn’t know that this little full stop means that I am absolutely, categorically, no longer in the fold. Unfortunately, because I am still on the email list, every week my inbox fills with messages ending with ‘x’ – not emails addressed specifically to me, just a plethora of inappropriately ‘Reply all’ emails sent to every woman with a daughter in the Red Rockets Under 10 Division 1 netball team. Every ‘x-ending’ email I have read over this netball season has served to reinforce the knowledge that if I were the object of Bea’s contrived affections her response to my offer to organise a group gift for our daughters’ netball coach would instead have gone more like this:

Oh Maria, you are always so thoughtful. Of course I had been planning to find Linney the perfect gift – she has done such a stellar job with the girls this season! Sadly, I am just run off my feet this week. With putting the finishing touches on the gala, and having the nanny taking time off for her final exams, I just haven’t had a chance to even think! You are a life saver! Truly. I can’t wait to see what you choose – you have such impeccable taste! By the way, where did you get those absolutely to-die-for wellies you were wearing last week? I absolutely covet them. I just have to have some. Anyway, I must press on, I have a hundred emails to get through. I see another one just popped up from the Governor’s Office. Did I mention that the Governor and his wife will be joining us at the gala? I have known him forever, of course. Just adored his Christmas card last year! Remind me to tell you about it. Thanks again for organising the gift. You are an absolute gem! Bea x

I guess, in a way, ‘Fine with me full stop’ is in fact a lot easier than the alternative. Back when I actually gave a damn what Bea thought of me, the alternative would have filled me with insecurity. What kind of ‘perfect’ gift would she have chosen for Linney? Did she really like my wellies? Would she ever choose them over her Louboutin ballet flats to go to an Under 10’s netball game – even when the grounds were covered in mud like when I wore mine the previous week – or did she really just plan to sit them on the porch by way of decor at her thousand-acre ‘hobby’ farm up the coast? How would I confess that I actually bought them at Kmart? And shit, shit, shit, the Governor is coming to the gala? It was bad enough that I had to hide from Joe that it was costing us $500 a head just to be at the gala, but now I would have to somehow convince him to pay a grand for a decent new dinner suit as well?

I have to wonder, though, if it was really such a relief to open up her fine-with-me-full-stop email, instead of receiving one of the phoney rambling prop-ups she sends to all the other netball mums – the ‘lower-case beas’ – then why did it feel like I had just had my face slapped?

Admittedly, I cared a hell of a lot less than I once would have. Before I realised that my name had been wiped off the Bea-list, ‘Fine with me full stop’ would have spiralled me into days of tortured analysis. What did I say that I shouldn’t have? Is she upset that I invited Lauren’s daughter for a play with Kate instead of asking Mirabella? What is it? What did I do? Did she wave to me in traffic and I missed it? Did Kate do something to upset Mirabella? Is it because Kate got a better score than Mirabella at the eisteddfod?

After being off the Bea-list for almost six months now, though, I have started training myself to see things differently. When I think about what got me wiped off the Bea-list in the first place, my reaction to her flagrant snubbery is now more a mixture of amusement and incredulity, rather than feeling any sense of self-recrimination.

A WORD FROM THE AUTHOR

Best – getting to know other authors. It has been a real ‘finding my tribe’ experience for me. I had no idea that there would be a bunch of other crazy peeps who wake up at 3am to type out ideas while they’re ‘fresh’.
Worst – sometimes it is hard to switch off from author mode and just be. Everything that happens in life starts to be viewed in terms of whether it might make a good book!

2.Which book of yours is your favorite? Why

Hah! I was just about to embark on a long-winded tale about how I have always considered Wuthering Heights to be my favourite book but I recently started reading it again and just couldn’t get in it. And then I realised that when you said ‘Which book of yours’, you probably weren’t referring to the ones in my bookshelf. So – to your actual question – I have to say Up and In. That would be because it’s my only book. But book baby no 2 is on the way … let the sibling rivalry begin!


3.What are your favorite authors in the genre that you write?

Liane Moriarty is the master as far as I am concerned. I love her writing style and the way she is able to weave multiple plot lines. It’s like a Seinfeld episode in a way – everything collides at the end. Her character development seems to be achieved with incredible efficiency – just a sentence here and there and all of a sudden you feel like you have a real understanding of who they are. I just read The Husband’s Secret over the holidays and I thought it was fabulous – even though I already knew what the husband’s secret was when I started the book (overly-thorough reviews can be troublesome like that! Can you be overly-thorough? I guess it’s just thorough…)

I think there is a little bit of me in most of my characters. I am prone to neuroses like Maria, and I like to think that like Maria (like pretty much all mums) I try to do the best I can to help my children be happy. There were a lot of likes in that sentence. As much as I can be neurotic, though, I can also be very rational like Susannah – especially when it is someone else’s dilemma! I am a bit of a Sonya in that I love a good spreadsheet. I’d also like to think I am kind-hearted and thoughtful like Lauren. The character I would like to be more like is Nic. I love the way she just doesn’t care what anyone else thinks of her and does, says and lives as she pleases, without any apparent fear of judgment. That’s something I need to work on.

Australian author, Deborah Disney, grew up in the regional city of Toowoomba and now lives in Brisbane with her husband and two school-aged daughters. Deborah has a BA/LLB from the University of Queensland and practised as a solicitor for a number of years prior to having children. She chose to specialise in litigation law as that seemed like the best preparation for what is now her looming battle – mothering her daughters through the teenage years. Deborah's first novel, Up and In, is a satirical look at the interactions of school and sporting mums.

Deborah will be awarding an eCopy of Up and In to 3 randomly drawn winners via rafflecopter during the tour. Use the link below to enter.

Email ThisBlogThis!Share to TwitterShare to FacebookShare to Pinterest
Labels: Deborah Disney, UP and In, women's fiction