Beyond the Book: Meet Kurt Deveraux 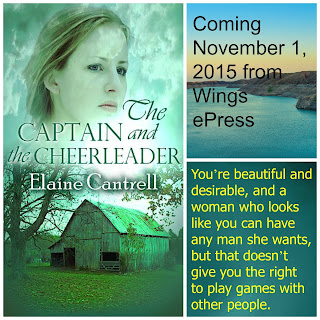 Kurt Deveraux is my hero in The Captain and the Cheerleader. A couple of weeks ago I introduced you to my heroine Susan English, so today let's meet Kurt Deveraux.

Kurt was born in raised in Fairfield where the story takes place. He's the head football coach and a teacher at Fairfield High. He's also active in his church and some community organizations. He's been interested in Susan English for a long time, but he didn't say anything because she was going out with another man.

When Susan reaches out to him, he eagerly accepts and asks her to go to a party with him. There are some things he doesn't know, though, things that would have made a tremendous difference in his response to her.

Here's a blurb about the book as well as a short excerpt, and I hope you'll pick up your copy when it's released on Nov. 2.


Susan English can’t stand Robin Lanford!  She’s so full of herself she irritates everyone on the faculty of Fairfield High.  When Robin bets Susan fifty dollars that she can’t get a date with Kurt Deveraux, the head football coach, Susan jumps at the chance to put the little heifer in her place.  She had no idea that teaching Robin a lesson would irrevocably change her life, strain treasured friendships, and throw two families into chaos.

Excerpt:  Jason is Kurt's friend and fellow teacher and coach.

Jason picked up the tea pitcher and refilled Kurt’s glass. “You don’t have to tell me you like Susan’s looks. I’ve seen the way you stare at her when you think nobody’s watching. Especially her legs. You’ve always noticed a woman’s legs.”

Kurt cursed his fair skin as his face burned. “I think she’s a classy, elegant woman, and you’re right about her legs. They’re slender and about a mile long.”

“Are you thinking of asking her out?” Jason shrugged. “It isn’t any of my business, but...”

“You’re asking anyway. Yes, I’ve thought about it. I heard she broke up with that guy, what’s his name, Tommy Price, but you’d better keep it to yourself.” Kurt frowned at Jason. “I don’t see any need for the whole world to know my business.”

“Is she coming to the game tonight?”

“Well, you probably wouldn’t have any time for her anyway,” Jason said as he picked up his cheeseburger.