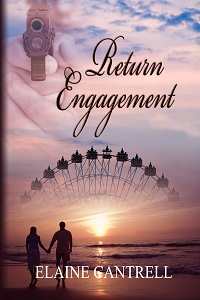 Welcome to Snippet Sunday and Weekend Writing Warriors, your chance to sample the work of a talented group of authors. When you finish here you can find more snippets at:

http://www.wewriwa.com
https://www.facebook.com/groups/SnippetSunday/
So far in my excerpts from Return Engagement my hero and heroine met on a beach ten years after his father broke them up. They find that all of their old feelings are still there even though she's engaged to another man. They've gone to a carnival together, and now they're walking back down the beach to their cars. He just gave her his jacket to wear and said he liked the idea of her wearing his clothes, like in high school.  They sat down on the sand to watch the moon, and both of them spoke at once. Elizabeth told him to speak first, and he told her she didn't really love her fiancé or she wouldn't have been flirting with and kissing him. Elizabeth just told him she can't stand it if he walks away again, and he tells her that it's taken 10 years, but they're back where they belong: together. Last week he asked to go home with her, and she said no. Today, I'd like to share another excerpt about my heroine Elizabeth. Understanding her background explains a lot about the way she reacts to things.

She stumbled in the dark and tripped over a chunk of driftwood; when Richard reached out to steady her, the moon glinted on the face of his watch. It looked, and undoubtedly was, expensive; it looked like the kind of watch she had seen on the arm of Brandon Whitaker, her first high school crush.

Brandon’s family had more money than anyone in Fairfield. He looked fabulous, dressed divinely, and drove a wonderful little blue sports car. They had algebra together in Mrs. Wheeler’s fourth period class. In the spring of her sophomore year he had invited her to go to the prom with him.

Thrilled, she had gone to the Goodwill store and found a prom dress. Her mother could ill afford to spend twenty five dollars on an outfit Elizabeth could only wear once, but she worked an extra day at her second job to raise the money.

As it turned out, she never wore that dress. Brandon’s father found out he had asked her to the prom and refused to allow it.

Return Engagement is available at http://www.whiskeycreekpress and at Amazon.com
Posted by Elaine Cantrell at 9:58 PM

Oh wow. She's carrying some emotional baggage for sure! Good job of letting the reader know what makes her the way she is. :-)

Also, your active wewriwa link on the sidebar is fine, Elaine. :-) It must have been overlooked last week.

She sure seems to have a problem with meddlesome fathers! I love the details about school and being in the same class.

That's a haunting memory to have to carry around. She's really got a history with falling for men whose fathers don't approve.

She seems to have an history of fathers against her. What are they all so afraid of?
I like how her memory jumped back to that, it might have some significance.

Yep, that can make a woman a bit skittish about wealthy men.
Great snippet. :)

Makes sense that she's nervous about being burned/shamed again by a wealthy person. Poor baby.

Good snippet. You've provided some rich background on your character, and the watch is a great device to trigger a flashback.

Enjoyed the snippet and learning more about her and what happened in the past. Remembering the good times and the painful times as well. Well done.

Ouch... Well, that's a stab in the heart if anything is. I The past hurts and never really goes away, does it? Always lurking to come back up by that one little trigger. Great insight to her.