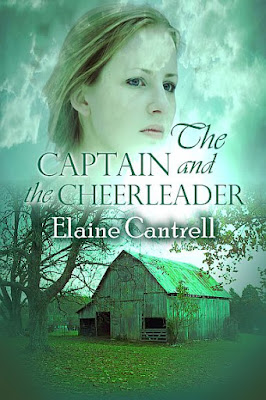 Welcome to Saturday Sample. Today I'll be sharing excerpts from The Captain and the Cheerleader which releases tomorrow from http://www.wingsepress.com. Let's have a blurb and an excerpt, and I hope you'll tell your friends about the book.

Susan English can’t stand Robin Landford!  She’s so full of herself she irritates everyone on the faculty of Fairfield High.  When Robin bets Susan fifty dollars that she can’t get a date with Kurt Deveraux, the head football coach, Susan jumps at the chance to put the little heifer in her place.  She had no idea that teaching Robin a lesson would irrevocably change her life, strain treasured friendships, and throw two families into chaos.f

Several people rolled their eyes. “Oh, I don’t think that’s the problem at all.” Susan smiled her most serene smile at her irritating colleague.

“Well, I think you’re full of it,” Robin sniffed. “If I couldn’t get him to notice me, I know you can’t.”
Around the faculty lounge a murmur of delighted, horrified voices broke out.

Melissa Taylor, Susan’s best friend, cleared her throat. “How long would she have to get the date?”
“Two weeks ought to be enough for an old pro like Susan.” Robin snickered as her gaze swept around the lounge. “Would the rest of you like to get a piece of the action?”

The Captain and the Cheerleader will be available tomorrow at http://www.wingsepress.com and Amazon.com

Email ThisBlogThis!Share to TwitterShare to FacebookShare to Pinterest
Labels: cheerleaders, football, mainstream romance, The Captain and the Cheerleader

good snippet to introduce us to the bet. Can't wait to find out how she's going to get his attention. like the story already.