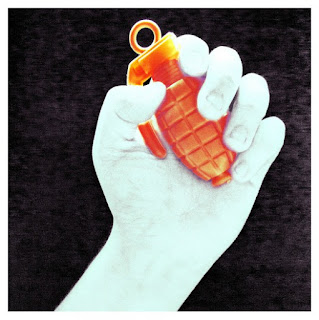 The Diamond Grenade
by Daniel Juliane


The Diamond Grenade is the story of a family line and a revolution told in five novellas - a complex tale told simply.


Book I: A Father’s Fate

At one point, on the banks of a confluence where two rivers ran together like closing thighs, there was a certain boatman. This boatman, name of Gur, had a fine long pole (not too bendy, not too strong) with which to move his long wide boat upon the water. Gur slept with his pole, lest it go missing. Then one evening while he was ferrying a few paying passengers from one put-in to the next, Gur’s pole got stuck in thick river-bottom mud and muck and he lost his grip and the pole sank out of sight. Cursing, Gur leapt into the water and dove for the pole. Long minutes passed and Gur’s nubile daughter Guri, at the prow of the boat, began to wail. Gur did not come back up. They found him later downstream. This is how the girl Guri became a very young boatman with a shoddy pole.

The thing about Guri is that she knew everybody. All the fares on her boat. They didn’t necessarily know each other all too often, but everybody knew Guri. And somehow she knew everybody back. She just had a mind for it. Who went with whom and how the families fell out. Names. All the names Guri knew. But only one name made her sing: Tuc. Tuc drank and threw dice, but early in their acquaintance he’d made bold to say that Guri would make a good mother. This observation of Tuc’s about Guri had won her over, so she sang his name in the dark. One syllable songs are short, but carry on the water.

Guri’s favorite disgruntlement was that there was no word for girl boatman. It was poling-upriver hard to get more than a grunt out of half her older passengers, because they didn’t see clear to it being right for her to be doing a man’s job. Tuc suggested ‘boatwoman’, but Guri allowed as how that was more the busty mascot off the bow of a ship than a person who poled for a living. Tuc took to riding with Guri quite frequently. Then one night, he brought her a new pole, and it was a good pole.

Not long after the new pole, Tuc convinced Guri to elope with him a ways downriver to a town where he had prospects. When they got there, they traded the boat and pole for two goats. Guri was better with people than with animals, so Tuc tended the herd while she met and memorized every person she could find. Soon she had so much work taken in to do for folks that what with going to the big, clean houses to perform services inbetweentimes, and attending in good turn to the day’s worth of all the waiting piecemeal work filling their modest house, Guri was too busy to make a baby.

Guri got fed up with being too busy to make a baby and made a baby. Tuc split. Guri’s popularity made her fatherless child the ward of the town. Everybody parented him. That’s why he grew up angry. His name was Gur, after his grandfather. Boy did he have a chip on his shoulder about being told what to do. Everybody told him when and where to jump. Only Guri could make him ask how high. Usually his answer would be jump why? The thing about having a whole village full of parents is that they are going to contradict each other and some of them are bound to be weird people.
AUTHOR Bio and Links:

As in medical school, praxis then practicum: I saw one, did one, taught one… now I do one after the other. One novella after another I mean. And they’re good. I saw novellas while acquiring my Bachelor's Degree in English Language and Literature/Letters with a minor in Psych at Indiana University in the mid-nineties, I taught and did novellas a few years later while pursuing a Master’s of Arts in Lit. at the University of Alaska, Fairbanks, and I have done a fancy set of five well here now (as I pursue an AAS in Accounting at a community college, btw). For more about me, check out http://dcjulian.wix.com/diamondgrenade.

Try not to evict me from my little party of self-congratulations about this piece.

A set of five good serial novellas. Hope you find the time to enjoy them.

The book is free and can be downloaded here:  http://blurbraffle.weebly.com/store/p1/The_Diamond_Grenade.html

Daniel will be awarding a $15 Amazon or B/N GC to five randomly drawn winners via rafflecopter during the tour. Use the link below to enter.