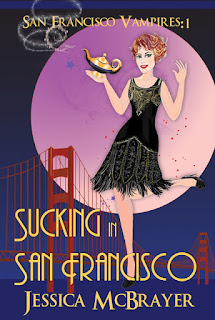 Working at a Suicide Prevention Center in San Francisco, Lily Goodwill thinks she’s heard it all—then she gets a call from a man about to jump off the Golden Gate Bridge. Something about the caller, maybe his yummy British accent or Lily’s ability to understand his crushing ennui, makes her break all the rules and rush to meet him. After all, she is a vampire and if she can’t talk him down she can glamour him.But things don’t go according to plan. Her caller glows with blue fire and turns out to be a vampire-hating Djinn. Suddenly, for the first time in centuries he’s found something intriguing. Is Lily really a vampire with a conscience and an obsessive-compulsive disorder, involving Handi-wipes and Lysol, or is she just another bloodsucker?Add in another vampire, with a history of female lovers stretching over three centuries, who swears he’s reformed and declares his undying love for Lily. Stir in a mean pair of witches and a vicious warlock, who are staking vampires around the city and you have a recipe for riotous adventure of supernatural proportions.Lily Goodwill is a quick thinking, smart-talking vampire who’s still figuring out how she feels about dining al fresco in the City by the Bay.

This was an interesting release for me. In most of the paranormal books I've read, humans are interacting with paranormal creatures, but in this story all of the main characters are paranormal. Most are vampires, but one is a Djinn. It was fun to see the interaction between the characters since all of them had special powers of one sort or other. All of the characters were well-developed, and I especially liked Lily, I mean, whoever heard of a vampire who works for a suicide hotline?  I also liked that the characters weren't stereotypical.

Another thing I enjoyed was the love triangle between Lily, a fellow vampire, and the Djinn. It adds a nice element to the dangerous situation Lily and her friends find themselves in.