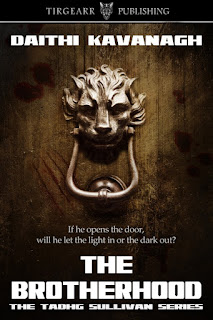 The Brotherhood
by Daithi Kavanagh

Detective Tadhg Sullivan’s life seems to be falling apart, since being shifted to Clare from Dublin after falling out with the Minister for Justice and the Garda Commissioner.

Suddenly Sullivan is knocked out of his lethargy when a teenage girl goes missing not far from Ennis where he has been stationed. Sullivan is asked to lead the hunt by the local Superintendent and is catapulted into a world of unimaginable horror.

She knew nothing of the white van that pulled up behind her, until the two men grabbed her and bundled her into the back of it.  She’d been jogging along the road, with her headphones on listening to Mumford and Sons.  At first she’d thought it was a prank being carried out by some of her friends.  But, as the van tore along the narrow road at top speed and she found herself being tossed from side to side, she knew something much more sinister was unfolding and started to scream.  Suddenly the van took a sharp left.  She fell and smashed her face against the side panelling.  Then she could feel it being driven down a long pebbled lane.  She stared at her headphones, the music still blaring, lying on the floor of the van.  She cursed herself for not listening to her parents who had begged her to bring her mobile phone.

I decided to review this book because I liked the sound of the blurb, and it delivered everything it promised. Detective Sullivan our main character has an issue with authority and with women. He drinks too much. In one way he reminds me of Sherlock Holmes. Holmes was at his best when there was a case to solve, and I think Detective Sullivan is the same.

I was intrigued by the terrorist that Sullivan confronted in the past. He's out of prison now, and without him the book wouldn't have been nearly as good. I hope Mr. Kavanagh uses him in other Detective Sullivan books.

I live in America, not Ireland, so to me the book had a delightful, slightly foreign flavor that I enjoyed.

The plot was well done and hung together well. All in all, I found it to be a nice read. I can recommend it without reservation to anyone who enjoyed crime dramas and detective fiction. 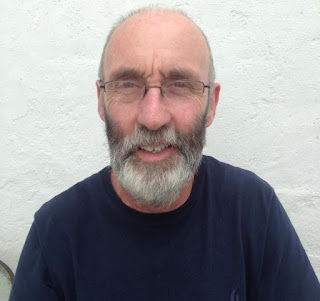 Daithi Kavanagh is 57 years old and lives with his wife and two teenage children in Trinity, Wexford. Up to 2012 when the recession hit Ireland he was making a living as a musician. He then went back to adult education and completed his Leaving Certificate in 2014. He is now studying for a degree in Culture and Heritage Studies at Wexford Campus.

While he was studying he began writing ‘The Gun’ which is the first book in The Tadhg Sullivan Series.  His second book in the series called The Brotherhood was released in May 2015. He is currently working on the third book in the series.

He plays guitar and sings in many of the pubs in his hometown of Wexford where he is often joined by his two children Ella and Rory who play fiddle and flute.

In his spare time he likes to walk his two dogs with his wife Caroline.

The author is giving away a $10 Amazon gift certificate. Use the Rafflecopter link below to enter.

Posted by Elaine Cantrell at 10:11 AM

Good afternoon Elaine and thank you for hosting The Brotherhood and myself today. Thank you for your review. Its great to get feedback on my books and I'm so glad you liked Detective Tadhg Sullivan. I am really enjoying writing about his adventures - my altar ego! I'm hoping to have a bit of banter here today. Daithi

Thanks for sharing your review, I'm looking forward to checking this book out myself. :)

Hi Daithi - Great post. I enjoyed reading your excerpt of the Brotherhood and now I can't wait to download and read the whole book.

All the best with your writing.

For your own reading, do you prefer ebooks or traditional paper/hard back books?

Hi there. I can't seem to find place to post on each comment so I'll do it all here if that's okay.
Betty - Thank you very much - I love to get good feedback. Best of luck to you!

Victoria - Thank you also. I am delighted with Elaine's review and I hope you enjoy The Brotherhood. Best of luck!

Cathy - Thanks Cathy, hope you enjoy The Brotherhood. Best of luck.

Mai - Hi Mai. Thanks for your comment. Until I started writing and until my books were published as eBooks I read only paperback/hard back. I still enjoy reading paperbacks but since being introduced to a Kindle I think they are great. They are so handy at night as I read in bed so I'm not disturbing my better half and also the books are cheaper which is a big plus for me. I've downloaded a load of new books since getting the Kindle. Best of luck!

thx u for hosting :)

This sounds like a great book~such a different premise! Thank you for sharing!